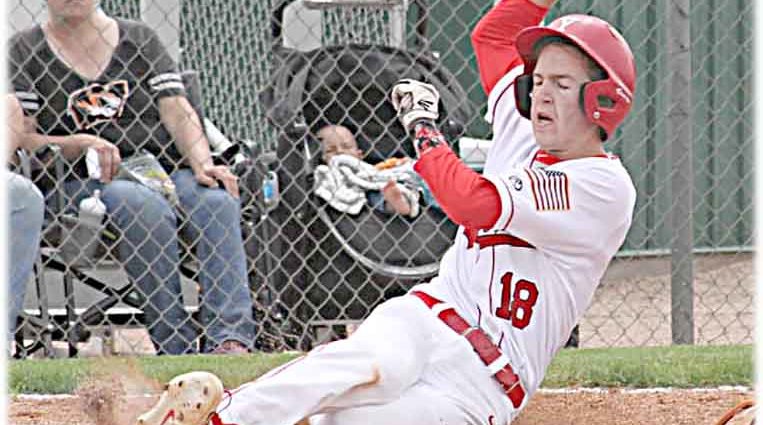 Tribe looks to get offensive

Yuma High School’s baseball team needs to get offensive.
The Indians have played fairly solid ball overall in Season D, but the one constant in the current six-game losing streak is the inability to string together runs.

Yuma dropped both games of its home-opening doubleheader, last Saturday to Wiggins, then lost Tuesday on the road to Limon, dropping to 2-6 overall.
The Tribe is back home Tuesday when it hosts Burlington for a twin bill that starts at 4 p.m.
Yuma was looking to get back on the winning track when it finally played the first homes games of 2021, only to get swept by visiting Wiggins, 7-5 and 5-0.
The Indians held the lead for much of the first game, but did not capitalize on a couple of scoring opportunities, eventually succumbing to Wiggins’ four-run seventh inning.

Yuma took the early lead when Yahir Trejo hit a two-out single. Andre Baucke followed with another single to give the Tribe a 1-0 lead after the first.
An error and a single set the table for a three-run homer to right for Wiggins in the top of the third.
Yuma strung together a solid at-bat in the bottom of the fourth. Hugo Montes hit a single up the middle, followed by Cade Morton drawing a walk. Kobe Rayl then lined a two-run single to right center, and advanced to second on the throw home. Trejo’s single to left drove in Rayl for a 4-3 Yuma lead.
The Tribe had a runner in scoring position in both the fifth and sixth innings but could not capitalize, staying ahead by one.
Wiggins finally broke through in the top of the seventh with four runs off of four singles.
Yuma had its chances in its last at-bat as walks loaded the bases with one out. Yuma got one-run on a bases-loaded walk but could not plate anymore, losing by two.
Trejo had a solid six innings on the hill, allowing two earned runs on six hits, striking out three and walking three. John Smith pitched the seventh.
Trejo had two hits and scored two runs, Rayl two hits, two RBI and one run, Smith one hit and one RBI, Baucke one hit and one RBI, Montes one hit and one run, Conner Lynch one RBI, and Cade Morton one run. The Indians struck out nine times.
The strikeouts went down to six in the second game, but the hits also dwindled to three as the Indians were shutout for the first time this season.
Wiggins scored three runs in the third, then added one more in each the fourth and seventh.
Lynch again took a tough-luck loss on the hill for the Tribe. The crafty lefty went the distance, allowed five earned runs on five hits, striking out three and walking five. Wiggins’ Taryn Yzagurrie also pitched all seven innings.
Victor Perez hit a triple for Yuma, while Jose Ruiz and Morton each had a single.
The Tribe traveled to Limon this past Tuesday, losing 10-3.
Limon took a 5-0 lead in the first and never looked back.
Yuma’s highlight came in the fourth when Perez lifted a three-run homer to center field with Baucke and Ruiz on board.
Besides Perez’s homer, Trejo had two hits and Smith and Ruiz one each. Ruiz took the pitching loss, and Baucke and Rayl also pitched.