A look back: 1996 state track champions

The glory days for Yuma High School boys track and field definitely were from the mid-1990s through the early 2000s.
Led by legendary coach Bill Kalb, the Indians consistently posted high finishes in the team points at the Class 3A Track and Field Championships. Finishing in the top 10 was commonplace, and several times the Tribe were in the top five.

YHS has been blessed with a tremendous number of outstanding track and field athletes, both boys and girls through the decades, including numerous state champions. We are hesitant to even begin trying to list them all for fear of leaving worthy ones out.
Only once, however, has YHS won a track and field team championship, and that came during that glorious year of 1996. Below is the account that appeared in the Pioneer following that landmark championship.
Nearly perfect day leads to 3A title
The smoke billowing to the south from the Buffalo Creek fire was the only reminder to the Yuma High School boys track and field team that the world is not a perfect place.
However, it was nearly a perfect world for the Indians inside Jefferson County Stadium last Saturday. Outstanding, gutsy efforts, which have been the norm this spring, even caught the attention of the big city press as the boys claimed the school’s first-ever state track and field championship.
Their 62 points put them 10 ahead of second-place Salida with 52. Faith Christian was third with 44, Brush fourth with 43 and Roosevelt fifth with 37.
It was YHS’s first state championship since the girls won the volleyball crown in 1990, and it was the first boys title since 1980-81’s undefeated basketball season.
“That was our goal,” senior sprinter Phil Kembel said, “but I didn’t know what to expect.”
What he got was four first-place medals to raise his final state-medal count to 12, playing a key part in the track program’s first team title. He set a 3A record in the 100-meter dash of 11.15, and fittingly concluded his high school career with more firsts (five) than any other medal. He also has three seconds, one third, one fourth, one fifth and one sixth.
Fellow seniors Preston Reitz and Clarence Young teamed with Kembel and junior Judson Hall to repeat as state champs in the 800 relay, and set a new 3A record in the process. The three seniors also teamed up with junior Michael Hutt to win the 400 relay.
Young, Reitz and Kembel won six state relay medals together, including two firsts in the 800 and one win in the 400, and one fourth, fifth and sixth in relays. They also qualified for state together in the 400 as freshmen but did not place. Young and Reitz ran their medal count to seven when they helped Yuma to a third-place finish in the 1600 relay Saturday.
“Yeah, I am going to miss running with these guys,” Reitz said after they won the 400. “It’s been a lot of fun.”
The march to the state title began Friday at Five Star Stadium by Thornton High School. Senior Jason Branaman wrapped up his own individual track career in style by earning his second state medal. He teamed up with juniors Max Moore, Rocky Ernest and Lucas Goeglein to place for the second consecutive year in the 3200 relay. The foursome placed fourth last year.
They bettered that mark this year by placing third in 8 minutes, 26.97 seconds.
Yuma proceeded Friday to qualify for Saturday’s finals in all all of its races — 100, 200, 400, 800, 400 relay, 800 relay and 1600 relay.
The race for the title began in earnest Saturday morning when Kembel blazed to the 3A record in the 100 in 11.15 seconds, and Hutt finished fourth in 11.36.
The victory ended two years of frustration for Kembel, who finished third in the 100 and second in the 200 as a sophomore, and second in both last year. Each time he had lost to a senior.
“It’s about time,” he said, admitting the victory helped relieve the tension a little. “I didn’t have a real great start, but I stayed loose. That’s what was most important.”
Next up on the schedule for the boys was the 800 relay. Young, Hall, Reitz and Kembel had won the final last year, and set a new 3A mark of 1:31.48 in Friday’s prelims. They almost matched that time again in the finals as they repeated with a time of 1:31.51, beating Machebeuf by over one-half second.
The 400 relay followed about one hour later. Both Machebeuf and the Yuma foursome of Young, Hutt, Reitz and Kembel had beaten the old record in Friday’s prelims, but the Buffaloes had the fastest time at 43.85 seconds.
However, the Yuma foursome proved to be the money players as they sprinted past Machebeuf in the finals with a winning time of 44.21. 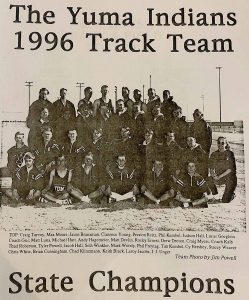 “I’m happy with how it’s turned out,” Young said afterward of his relay career. “If we do well in the 1600 that’d top it off – and winning the state title would be great.”
The Indians had 40 points by that time and some key races left. Brush was the closest at that point, but Salida was going to rack up some points late in the meet.
Yuma’s victory parade slowed a bit in the open 400. Judson Hall was obviously hampered by blisters on both feet, but still ran in pain to sixth-place finish in 52.39. The winning time of 50.58 by Fountain Valley’s Michael Wise was just slightly quicker that Hall’s time of 50.98 in the league championships prior to developing blisters. Hall still has one year left though.

So does Moore, who put in another great effort in the 800 run, placing fourth in 2:02.78. Jesse Yaffe ran away to first in 2:00.42, but second through fifth places were separated by just 26-hundredths of a second, Moore just a short step away from placing second.
Those two efforts raised Yuma’s point total to 45 — and the 200 meter dash was up next.
Kembel made it a personal clean sweep by sprinting to the victory in a close race, his winning time of 22.22, just barely ahead of Salida’s Kyle Swartz’s time of 22.28
Hutt also placed sixth in the race with a time of 22.89.
“I came in pretty confident because these were my last races of the year,” Kembel said after the 200. “I was feeling better than I thought I would be (before the 200). It feels real good.”
The 11 pints gave Yuma a total of 56, which clearly was enough as Salida was second with 42 points, but only had one race left — the 3200. The Salida runner won that race but Salida still trailed Yuma 56-52.
The drama still was not over for the Indians. Hall had to drop out of the 1600 relay, so Hutt was pulled out of the stands after thinking he was done for the day, and the season.
So the Indians were without their best quarter-miler entering the 1600 relay, and already were assured the state title. However, they still competed like champions, Hutt ran in fourth place in the first leg, Moore and Reitz got he Indians to second, then Young held on in the anchor leg to finish third in 3:31.47.
“We just have a great bunch of kids,” a glowing coach Bill Kalb said afterward as his boys prepared to accept the championship trophy.
That was never in better evidence than last Friday and Saturday.

2020-05-21
Previous Post: Death Notice, Sue Schroetlin
Next Post: Heather Klein is B of C Teacher of the Year