Class of 2021 enjoyed the outdoors

Yuma High School held its first outdoor commencement in decades, and it turned out to be a great event.
The 68-student strong Class of 2021 received their diplomas in front of an overflow crowd at the football/track complex, on a lovely mostly overcast afternoon, last Sunday. 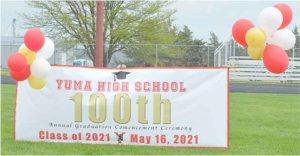 Graduating Cum Laude (a grade point average of at least 4.0 for all eight semesters of high school) were Richardson, Jayci Mekelburg, Cade Morton and Jada Young.
Graduating with High Distinction (3.8-3.99 cumulative grade point average) were Shelby Blach, Lane Remmich, Kimberly Guerrero, Jazmin Danner, Tiana McCasland, Sandra Gilliland, Charles Perrin, Joey Ross, and Raquel Eduardo.
Graduating with Honors (3.5-3.79 cumulative grade point average) were Cody Gross, Laine Smith, Julissa Garcia, Ana Karina Rascon, Kaylee Etl, Cinnamon Cook, Kyler Goeglein and Alma Darina Rascon.
Lone Star also held its commencement last Sunday, sending off one of its largest classes in recent memory — 16 members — with a morning commencement.
The commencement season continues Sunday with Liberty and Arickaree both holding their events. Both schools have four graduates in the Class of 2021.
Liberty will have its commencement at 1 p.m. Jaret Lichty is the valedictorian and Tyler Hase the salutatorian. Also receiving their diplomas will be Eden Sears and Eastin Hastings.
Arickaree will have its ceremony at 2 p.m. Sunday. Receiving their diplomas will be Jared Mason, Karina Ruiz, Shane Bair and Tristin Niccoli.
Otis High School will conclude the local graduation season next Friday, October 28. Look for more on the Otis Class of 2021 in next week’s edition. 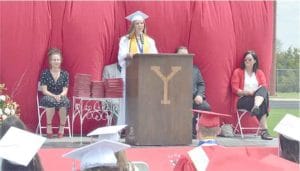 School’s out for summer
Yuma schools let out for the summer last Friday, May 14. It will be a long summer vacation as the 2021-22 school will not begin until after Labor Day. The long break is due to the major expansion/renovation project taking place at Yuma High School.
Liberty’s last day of school is today, May 20. 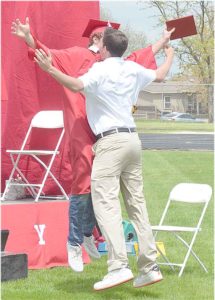