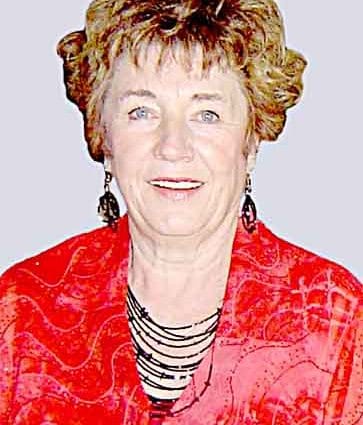 Erika Miller was born June 20, 1939, in Illeschesti, Romania in what was once part of the old Austro-Hungarian Empire. She was the third of four children of Else and Franz Huber. Her forefathers came to the area in 1782 from the Rhineland area in Southwest Germany. She was baptized in the local Evangelical Lutheran Church.

Her parents moved to the family farm in 1933. In addition to farming, they purchased the area’s first mechanical threshing machine to harvest grain and were grain brokers. With typical German thriftiness and hard work, the family prospered and their business grew.

Because of the Communist agitation taking place at the time, the Romanian government became unstable. This civil unrest caused her father to be drafted into the Army. He was stationed in the Ski Patrol Battalion in the Carpathian Mountains.

As time went on, the family sensed that things were going to get worse. In 1940, all Germans were forced to leave their homes and property and leave the Country. On Christmas Eve 1940, in a blinding blizzard, her family left their home of 157 years with only a horse and wagon – along with 4,000 other Lutherans from the area. The Communist Russian Army was fast approaching their town with reports they were leaving nothing but death and destruction in their wake.

Having barely escaped with their lives, they were forced to resettle in East Germany. However, after living there for a just few years, in 1944, the Russian communists were invading their home once again. They had to quickly flee.

The elderly and children were put on trains for West Germany to get out of harm’s way. Erika was separated from her parents and was not sure she would ever see them again. She was sent by train to Bavaria, along with her grandmother, brother Ozzie and sister Erna. This was a very dangerous journey because it was the closing months of the war.

The train they were riding on was operated by Swiss Red Cross workers. It was filled with refugees escaping the communists. Despite the train being marked as a Red Cross train, it was attacked and fired upon by war planes. Many on the train were killed and her brother Ozzie was hit by shrapnel in his leg. By God’s grace, they all survived and made it to southern Germany.

During this time, her parents also made out of East Germany and went to Salzburg, Austria. They were still separated from the children and had no idea where they were. Alone and on foot, her father traversed the countryside in an attempt to locate the family. After seven months of intense searching, he miraculously found the family. They were thankful finally to all be together in the town of Altminster, Austria, which was to be their home for the next 11 years.

Erika graduated from an exclusive Girl’s College majoring in Fashion Design, Art and Dress Design. She used her artistic talent throughout her life. She loved to change the decor of her home for each season and was insistent on having well manicured yards and gardens. A fact that any family member can confirm.

In 1956, her family applied for immigration to the United States. They had seen pictures of Colorado and finally came to settle in Denver, Colorado. She very proudly became a U.S. citizen in 1976 and always loved being an American.

She began a career in fashion and design at Neusteters in Denver. She designed clothing for many different clients, including a number of celebrities such as Ethel Merman.

On August 5, 1961 Erika was united in marriage to Rev. Robert Lee Miller and began a new career with a higher calling. This union was blessed with three children.

She dedicated her life to the well being of her family, Church and community. She was instrumental in organizing the famous Christmas Craft Bazaar at St. Paul’s Lutheran Church in Otis, CO which raised tens of thousands of dollars for the Church and missions. She was also active in the Lutheran Ladies Aid group serving as president for many years.

Erika passed away on March 9, 2020 at the Swedish Medical Center in Englewood, Colorado.

Erika was preceded in death by her father Franz, her mother Else and her brothers Ozzie and Arnold.

Mourning her passing are her husband Rev. Robert Miller, sons David and Eric (Anne), daughter Angelika (Eugen), grandsons Luke and Alexander, sister Erna Proctor (Lyle), aunt Matilda in Munich, and many cousins, nieces and nephews throughout the U.S. and Europe.

The funeral service was held on Monday, March 16, 2020 at 11:00 a.m. at St. John’s Lutheran Church in Yuma, Colorado. Interment was at the Yuma Cemetery. Officiated by Reverend Dennis FitzPatrick and arrangements were made by the Baucke Funeral Home.

Memorials may be given in honor of Erika to St. John’s Lutheran Church in Yuma, Colorado.