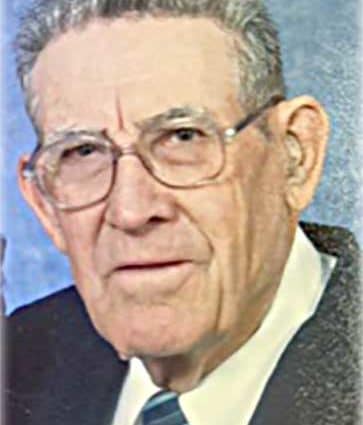 George W. Spellman was the second oldest of eight children born to Eldon Thomas (Bud) Spellman and Lois B. (Richards) Spellman January 6, 1929, at home in the Alvin area north of Wray. He passed away June 6, 2021, at Wray Community Hospital.
George grew up in the Alvin community and when he was 16 years old, he went to the Kirk area to work on his uncle’s farm and ranch. During that time, he was drafted and served in the Army from 1951-1953 at the Presidio in San Francisco during the Korean Conflict as a military policeman. This is where he met his wife, Lois Wynne, of 68 years through a mutual relative by marriage. After being honorably discharged, he and Lois were married in San Francisco and returned to Kirk. To this union two children were born – Kathleen and Beverly. They began a life of farming and ranching that spanned more than 50 years. George wasn’t afraid of hard work as he would tell stories of picking corn by hand in those early years. In the winter when there wasn’t any farming to do, you would find him doing carpentry work for someone in the area. He was not one to be idol, so in his later years after retiring he did latch hook and was always awarded a blue ribbon at the county fair.
Pastor Jack Stout will be officiating the funeral service on June 17, 2021, at 10:00 AM at the Liberty Baptist Church outside of Joes with a community dinner following at Grassroots Community Center in Joes. Interment will follow at Grandview Cemetery in Wray.
George was preceded in death by his parents, Eldon Thomas (Bud) and Lois B. Spellman, parents’ in-law, Lyle and Dorothy Wynne, sister, Dorothy Schmidt and husband, Clifford, brother, Bob Spellman and wife, Patty, brothers- in-law, Cleo Brown, and Chuck Schmidt, sisters- in-law, Sharon Spellman, Dorothy Wynne, and Joan Wynne Kauahi.
George is survived by his wife, Lois, of 68 years, daughter, Kathleen Holland and husband Mike of Grand Junction, daughter, Beverly Pletcher and husband Marvin of Yuma, grandchildren, Megan and Josh Ringlein of Sterling, Melissa and Ben Augustine of Lenora, Kansas, and Makala and Jeff Koester of Padroni, great grandchildren, Meritt Ringlein, Paisley and Rylee Koester, brother, Ralph Spellman and wife, Leann of Yuma, sister, Jennie Brown of Yuma, sister, Minnie Schmidt of Haxtun, brother, Tom Spellman and wife, Margaret of Yuma, sister, Peggy Spellman of Wray, brother in-law, Donald Wynne of Virginia Beach, VA, a host of nieces and nephews, and his beloved cats Tom, Callie and Socks.
A Viewing/Visitation was held at the Schmidt-Jones Funeral Home, 427 Adams Street, Wray, Colorado on Wednesday, June 16, 2021 from 8:00 a.m. – 5:00 p.m.
Memorials may be sent to Liberty Baptist Church or the South Y-W Ambulance.
Schmidt-Jones Funeral Home is in charge of the arrangements.