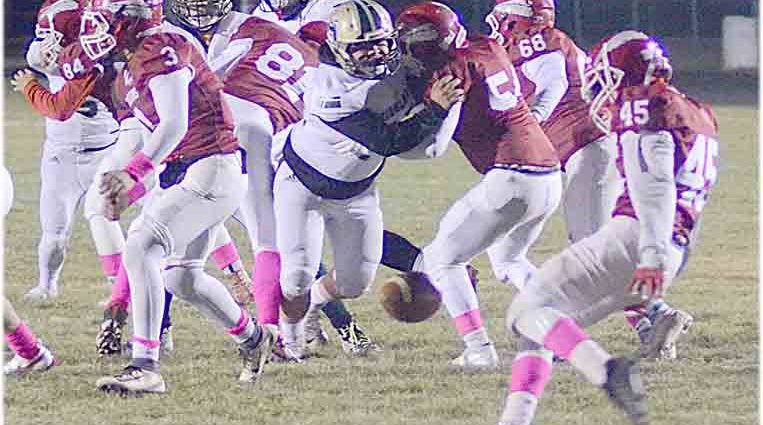 Yuma High School’s football team will be playing its fourth game of this unusual 2020 season, when the Indians travel to Burlington, Saturday afternoon.
Burlington will be playing its second game. The Cougars opened the season October 8 with a 43-12 loss at Wray. The high school then had to shut down due to COVID, resulting on the Cougars missing their last two play dates, including a league game with Holyoke two weeks ago.

The game originally was scheduled for Friday night, but was pushed back to Saturday to give Burlington some time as the school reopens and players come off any quarantine.

Yuma coach Kelly Seward said he did not know what to expect, in regards to Burlington not being able to practice much lately. However, he said the Cougars seem to be running the same concepts under a new coach after the legendary Glynn Higgs retired after least season.
“They still run that option and their quarterback definitely is their best athlete,” he said. “We have to find a way to corral him and limit big plays.”
Teams have to play at least four of six games to be playoff eligible, so the Cougars cannot miss any more games to stay in the hunt for the postseason. As mentioned above, Yuma will have four games after Saturday.
However, neither the Indians nor the Cougars are among the leaders for the eight playoff berths in Class 1A.
Yuma is 1-2 overall and 0-2 in the North Central Conference after losing 40-0 at home to the Highland Huskies, last Friday. The Indians sit at 21st in the Rating Percentage Index, and Burlington, 0-1, is 15th. In regards to the other NCC teams, Holyoke is No. 1 in the RPI, Limon No. 2, Wray No. 6, Wiggins No. 11 and Highland No. 12.
Yuma has games remaining with Wiggins and Wray after Saturday.
“We have to find a way to win these next two games, and they are winnable games, and then see what we can do against Wray,” Seward said.
NCC teams had to scramble for games last weekend due to COVID. Limon’s non-conference game at Alamosa was called off, so the Badgers took on Colorado Springs Christian, cruising to a 42-7 win. Colorado Springs Christian has had to scramble for opponents each of the last two weeks. Wray’s non-conference game at Jefferson also could not go on, so the Eagles ended up hosting Class 3A Niwot, cruising to a 52-22 win.
Holyoke sat out two weeks ago after the Burlington game was canceled. The Dragons returned last Friday with a 34-6 home win over Wiggins.
Limon, Wray and Holyoke are 2-0 in NCC play, Highland 1-1, Burlington 0-1, and Yuma and Wiggins 0-2.
NCC games this week include Limon at Wiggins on Friday, and Holyoke at Wray in a huge showdown on Saturday afternoon.
Highland steps out of the conference to host Prospect Ridge on Friday.
Now Yuma and Burlington get to deal with the reality that both teams can suit up only 25 players, Saturday, due to new COVID-19 restrictions. Even in practice only 25 players can be on the field, according to Seward. Yuma is going to handle it with some players practicing on the softball field.
Most 1A schools don’t play much more than 25 in the regular rotation, so it will not make much difference during the game, except some who get a break during special teams now are going to have play then also.
The Indians now have played three games win which the winning team scores at least 40 points while shutting out its opponent. Hopes were high after the Indians were on the winning side the previous week against Platte Canyon.
However, Highland came to town last Friday, and made a cold night even more so by handing the Tribe a 40-0 loss.
The Indians knew Highland’s offense centers around senior running back Holden Morgan.
However, it was not much they could do about it as Morgan averaged 11.3 yards per carry, running for 215 yards and four touchdowns on 19 attempts.
Overall, Highland ended up with 368 total yards, including 336 on the ground. Yuma had 160 total yards, 157 on the ground, and was shutout for the second time in three games.
“Defensively we have to create turnovers and get off the field,” Seward said. “Our special teams have to get better. On offense, honestly, we are one missed assignment or one mental mistake from this offense looking like it did last year.
“We have to put the right guys in the right position,” he continued. “We’re going to make some changes, which you’ll see this week. We’re a little too one-dimensional, and that’s on us coaches getting more players involved.”
Yuma was without starting quarterback Joey Ross for last Friday’s game. Still, the offense had a promising start, getting two first downs. The drive stalled, though, and the Indians had to punt.
Morgan then broke free for a 79-yard touchdown run. The extra point was good, and Highland led 7-0 less than 4 minutes into the game.
Highland started its next drive on Yuma’s 40-yard line, but the defense got a stop on fourth-and-seven.
Yuma could not drive again, but the defense made a play again as Damon Thornton recovered a fumble on third down.
A bad snap on Yuma’s next play resulted in a 10-yard loss, and the Indians ended up punting again.
Morgan then broke free again for an 85-yard touchdown run on first down. The extra point was no good, leaving the Huskies ahead 13-0.

It stayed that way until halftime.
Any hopes for a second half comeback started to fade early in the third, when Highland’s Travis Woods stripped the ball out of Yahir Trejo’s hands and sprinted 40 yards for a touchdown.
Highland tacked on two quick touchdowns at the end of the third. Morgan scored on a 13-yard run for a 26-0 lead. Yuma then failed to cover the ensuing kickoff, with Highland recovering inside Yuma’s 20-yard line. Morgan scored a short time later on a seven-yard run for a 33-0 advantage. Highland scored one more time, on Caleb Polk’s four-yard run, with 59 seconds left to account for the final score.
Yuma did find some success on the ground, as Clay Robinson finished with 130 yards on 28 carries, an average of 4.6 yards per attempt. Trejo added 23 yards on eight carries, Aiden Blanco nine on three attempts and Ethan Goeglein five yards on three carries. Trejo completed one pass to Robinson.
Defensively, Louden Blach was in on 10 total tackles, Trejo eight, Lane Remmich seven, Kail Cooper six, Jose Ruiz five, Juan Cortes four, John Smith three, Robinson three, Lars Sims three, Eduardo Corral two, Jaxson Lungwitz two, Thornton two, and Will Marshall, J Gordo, Kevin Hermosillo and Christian Quezada one each. Thornton also had the fumble recovery.
Alex Lozano averaged 37 yards on nine punts.