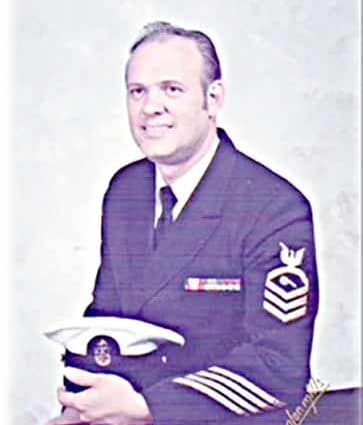 Jake Leroy Bigner was born on March 21,1938 to Jake and Louise (Tatum) Bigner. He entered eternal life on August 30, 2021, at the age of 83.
Jake was born in Hawk Springs, Wyoming and lived east of Wray as a young child.  He attended Wray schools graduating from Wray High School, class of 1957. One of his fondest memories was being a member of the WHS 1957 State Champion Wrestling team. Jake took 2nd in state that year, wrestling at 175#.
Jake enlisted in the United States Navy on September 12, 1957. He served aboard the USS Dixie, Frank Knox, Navarro, Iowa Jima and Cleveland. His last tour aboard a ship was on the USS Dixie. Jake was a machine repairman and held the title of Chief Petty Officer. During tours of duty and shore duty he was stationed in San Diego at Miramar or North Island base. In 1976, Jake became a Naval Recruiting Officer and served this position in Denver. He retired after 21 years of service on November 3, 1977. Jake was extremely proud of his service in the Navy and remained in contact with many of those he served with.
Jake was married to Carean Potts in 1961. To this union, a daughter Lynnette Darlene was born in 1962.
Jake later met and married Jean Marie Keary Brown on October 17, 1963. He gracefully and most lovingly inherited three children to the marriage: Beth, Kevin and Joey. Upon retiring from the Navy, Jake and Jean moved to Wray so that they could be closer to Jake’s family. They bought the little pink house on Dexter Street.
Jake worked for NOWSCO trucking for a few years before he began working for Yuma County Road & Bridge from 1982 to 2002, retiring after 20 years. Jake was not one to sit idle and began helping Lenz Farms during potato harvest to keep busy. It was his goal to be first in the field each day.
Jake was an active member of St. Andrew’s Catholic Church and served in the Knights of Columbus. He was also an active member of the Veterans of Foreign Wars. Jake was strong in his faith, loved his country and was very proud of his family.
Some of his favorite activities were renovating the little pink house into a larger tan house, which he and Jean called home for 44 years. He loved gardening, canning, playing cards, morning coffee at Riverside Cafe, making toffee and peanut brittle at Christmas, watching his grandkids’ activities and woodworking. Jake and Jean also enjoyed traveling to visit family, especially alongside Betty and Dean. He became quite tech savvy and enjoyed using the latest devices. Jake was also an avid Denver Broncos fan.
Jake is loved by many and will be missed.
Jake is preceded in death by his parents, Jake and Louise, his brothers, John William, Larry and Carl, son, Joseph, niece, Joyce, and sister and brother in laws, Barbara and Elmer Thorne, John and Mary Anne Keary and Daniel and Peggy Keary.
He is survived by his wife, of 57 years, Jean, daughter, Beth and her husband, Craig Saxton, son, Kevin Brown, and daughter, Lynnette and her husband, Jack Armistead. Grandchildren, Cole (wife Ann Marie), Reese (wife Jodi) and Lauren Saxton, Jessica Martin and Justin (wife Jessica) Armistead and nine great-grandchildren, Gracie and Carter Saxton, Aiden, Grayson and Lillian Harris, Layne Martin, and Alexander and Ava Armistead. Sister, Betty and brother-in-law, Dean Perry and a host of nieces, nephews, family and friends.
I have fought the good fight, I have finished the race, I have kept the Faith.
2 Timothy 4:7
Rosary was held on Thursday, September 2, 2021, 7:00 p.m. at the St. Andrew Catholic Church in Wray, Colorado. A Mass of Christian Burial will be held on Friday, September 3, 2021 at 2:00 p.m. at the St. Andrew Catholic Church in Wray, Colorado with Father Felicien Ilunga Mbala officiating.
Interment will be held in the Grandview Cemetery in Wray, Colorado. Memorials may be made to the Veterans of Foreign Wars Post #4671 in Wray, Colorado 80758.
Schmidt-Jones Funeral Home is in charge of arrangements.