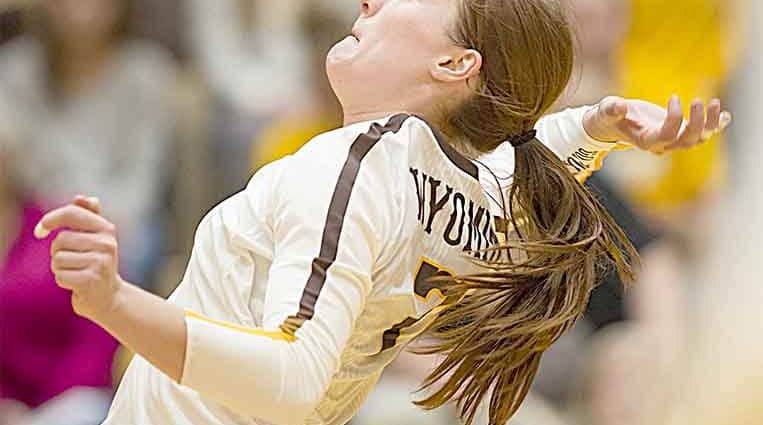 Locals getting it done at the collegiate level

Several Yuma High School graduates have continued their education while also competing in athletics at the collegiate level.
It’s about time the Pioneer takes a look at how it is going for all of them.
Tara Traphagan, a 2016 YHS graduate, has concluded a very successful career with the University of Wyoming volleyball team.
The Cowgirls went 22-9 in the 2019 season, including an impressive 16-2 record in the Mountain West Conference. The Cowgirls barely missed advancing to the NCAA Tournament, but did compete in the National Invitational Volleyball Championship for the second straight year. They won their first match in the postseason tournament, 3-1 over Northwestern State, but then were knocked out in a five-set loss to Weber State on December 6.

Traphagan played no small part in the Cowgirls’ success throughout her four-year career. The Kinesiology and Health Promotion major finished her career with 948 kills, including 286 in 2019. Her best season in terms of kills came in her sophomore campaign when she had 312.
Traphagan had a career-high 117 digs last season, finishing with 282. She was in on 325 blocks, including 60 this past season.
She has played volleyball while also maintaining excellent grades with a difficult course load.
Traphagan was the Class 2A Player of the Year after the Indians’ 2015 championship season, and earned the prestigious 2016 Freddie Steinmark High School Student-Athlete of the Year Award.
Chasey Blach, a 2019 YHS graduate, stepped right into the rotation in her freshman season at Adams State College in Alamosa. She had a season-high 11 kills at Fort Lewis College in October, and finished her freshman campaign with 99 as a middle hitter. Blach recorded 37 digs and was in on a total of 66 blocks. The Grizzlies finished with a 9-18 record, but had only two seniors on the 2019 team.
Two other 2019 YHS graduates played volleyball last fall for North Platte Community College in Nebraska.
Taylor Hansen recorded a total of 167 kills, including a season-high of 13 against Sheridan College. She also was in on a total of 94 blocks, and had 56 digs, including 15 against Butler Community College.
Tania Morales also played for the Knights. She had a total of 96 digs, including a season-high of 12 against Highland Community College. She also had 15 serves.
The Knights finished with a 14-20 record.
Dillon White, another 2019 YHS graduate, was on the Nebraska Wesleyan University football roster this past season as an offensive lineman. The Prairie Wolves went 3-7 last season.
Paul Brophy, a 2019 YHS graduate, is on the Hillsdale College college baseball team in Michigan. The pitcher competed in the fall season, and the Chargers now are preparing for the spring season that counts. The season begins February 15.
Cody Robinson is finding playing time as a freshman for the Black Hills State University women’s basketball team. The 2019 graduate is averaging more than five minutes per game for the Yellow Jackets. She is averaging 1.3 points per game, and about 1 rebound per game, along with having six steals on the season.
Black Hills State, located in Spearfish, South Dakota, entered this week with a 7-5 record after splitting two home games last weekend.
Jake Chrisman also is playing basketball at Black Hills State. The freshman is redshirting this season, with an eye on helping make an impact for the Yellow Jackets in the 2020-21 season.
Ty Thurston currently is in his senior season with the Chadron State College track and field team. The 2016 YHS graduate has competed in the heptahlon and decathlon for the Eagles. The indoor season concludes March 13 with the NCAA Championships, with the outdoor season beginning March 28.