Yuma School District-1’s multi-faceted and complicated $32 million expansion/renovation project is coming along on time to get the 2021-22 school year started on September 7.
The Yuma-1 Board of Education received an update during its regular meeting, Monday night at the district office in downtown Yuma.

It also was explained the “final” release of the project will not be until early in 2022, about four months after the initial estimate of fall of 2021, which was made even before the bond issue was passed by voters in November 2019, due mainly to add-ons to the project, which is explained further below.
Y-1 Superintendent Dianna Chrisman and Chad Rayl of owner’s representative Project One, provided the update.
Rayl reported that the concrete bus loop on the west side of the Morris Elementary/Yuma Middle School campus is completed. Several buses have been driven on it for a test, and the arm bars also worked. However, Rayl and Chrisman said some adjustments are being made with the concrete so buses have an easier time on the loop’s curves.
The main parking lot on the north side of Yuma High School’s new wing has been paved with asphalt, and striping was to begin this week. Work continues on the revamped south parking lot, including landscaping, electrical and more. That lot will not be completed until later in the fall.
Demolition of the old transportation building located on the campus’s northwest corner is to begin later in August. However, Chrisman noted the whole building will have to be enclosed prior to demolition so nobody will be able to watch. The reason is because the roof needs to be supported separately from the walls, which have to be taken down separately due to asbestos abatement. The demolition will take about two to three weeks. That area then will be an open field area including drainage. 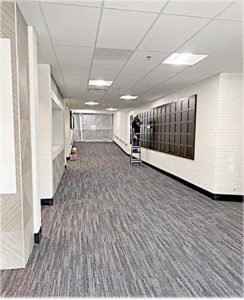 The interior of the new wing is coming along at an efficient pace. The main offices, science classrooms, vo-ag area are to start receiving furniture soon, as well as the new library area (the old main offices), and renovated art and band classroom wing.
Rayl said district representatives and those from Neenan Archistruction are conducting several “punch list” walk throughs this week to make sure the new wing is ready to go.
Teachers are scheduled to start moving in by September 1, though some might have to wait a day or two. “We’re going to be cutting it close in some areas,” Chrisman said.
YHS will be using three classrooms in the NJC building across the street for the fall semester, and parts of the old vo-ag building, which will house Transportation, also will be utilized. Chrisman said Neenan has been working hard at finding extra classroom space in January, as NJC will not be available after the fall semester.
Hand rails are being installed in The Pit.
However, the commons area, which was added as a key renovation project, will not be completed and released to the school district until sometime in October. It has been completely torn out and abatement successfully completed, the board was told Monday night.
Chrisman said the kitchen still will be in working order, and the district exploring several options on where to have breakfast and lunch until the commons is reopened. There also has been several meetings about how to accommodate volleyball matches and fans in the fall. Chrisman said the district, Project One and Neenan are working on walking path options between The Pit and the new auxiliary gym.
The core curriculum classrooms in the old part of the school being renovated is the next main focus. New HVAC units have been installed on top of the old classroom wings. However, crews found strange roofing structures as it tore out the ceiling, so steel support structures had to be installed to properly support the HVAC units.
The full project should be completed, with final release to the district sometime in late January to mid-February. However, certain areas will be released as they are completed.
Rayl told the board the project remains on budget, with $318,000 in owner’s contingencies, $269,000 in Neenan contingencies, and $100,000 in allowances — and that is with all the abatement work completed.
Chrisman said there has been a lot of effort and flexibility in the daunting endeavor, “but the project is amazing.”

Project One amendment
The Yuma-1 Board approved a recalculated consultant agreement with Project One, during Monday’s meeting.
It was explained that Project One was hired as the owner’s representative even before the bond issue was passed by voters. At that time, projections had the project being completed by this fall.
However, the actual construction timeframe is going to end up being about four months longer, due to unforeseen parts of the project, including value-added additions such as the commons renovation and south parking lot renovation made possible by savings on the project.
Therefore, Project One has recalculated the firm’s time and effort to come up with a new fee.
Chrisman told the board she has no issue with the new figure. She explained that it has been an “incredible benefit” to the project and district to have Rayl, Project One’s frontman on the project, actually living in Yuma, being able to respond to various challenges in a much more timely manner.
Board member Lindsey Galles also noted the district has been able to add to the project with money Project One has saved it in other areas.