Are there any school bus drivers out there?
Because Yuma School District-1 could use your help.
The chronic problem of having enough bus drivers to cover the regular daily routes, along with all the activity trips, has become even more acute as the new school year begins.
Yuma-1 has not been able to hire a new bus driver in more than a decade, and lost a driver this past week when she moved out of the county. Plus, the district lost two long-time drivers to retirement over the summer.

The issue was discussed at length during the Yuma School District-1 Board of Education’s regular monthly meeting, Monday night at district headquarters in downtown Yuma.
“We don’t have answers or recommendations,” Superintendent Dianna Chrisman told the board. “We welcome any suggestions…We just want to make sure the board understands we may have to make some adjustments on the fly and we may not be able to pick up all the students that we do now.”
She and Transportation Supervisor Jeanne Yenter explained that it is difficult hiring large-bus CDL drivers. Yenter explained that even those with a CDL already have to go through an extensive and time-consuming course to become a certified bus driver.
Yuma-1 is covering the regular routes at the moment by utilizing mini-busses and current staff members to help cover the country routes. Dave Sheffield, Jose Rivera, Ben Inouye and Kent Chrisman were approved as route drivers during Monday’s meeting.
The four are split up into teams, with one taking the morning route and one the after-school duties, because they all also have their full-time jobs in education. However, the current quarantine, which includes some staff members, has thrown that plan out the window temporarily. 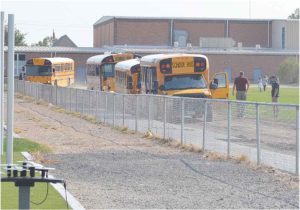 Yenter said she adjusts routes on an almost daily basis based on the drivers available, and the students who actually get to go to school, in an effort to cut down on the time any one student has to be on a bus. She said there is one elementary student who is picked up at 6:20 a.m. and dropped off at 5:30 p..m.
She said she has called numerous people with a CDL, and there is no interest.
Board president Dan Ross, who acknowledged his wife is one of the regular bus drivers, suggested significantly increasing the pay for drivers in the hope of attracting some interest.
Chrisman and Yenter said the pay scale never seems to be an issue with potential drivers.
Rather it is the awkward work hours. A driver works early in the morning, and then again after school, so a driver is kind of tied down all day for a part-time job. The district does all it can to offer other work within the district during the day so drivers can be full-time employees and receive the full benefits, but that does not seem to attract much interest.
Yenter said there also is a “stigma” with being a bus driver, who can be looked upon as glorified babysitters, who can have 70 students on the bus and they are on their own as the only adult. Chrisman said they have been told it is one thing to drive a loaded truck with a cargo, but something else entirely to drive a bus full of young people.
As in the past, it was mentioned again Monday that potential drivers have said they would be willing to drive to activities, such as sporting events. In the past, though, it was not viewed as fair as the activity trips are how the regular route drivers can make some extra cash. (It’s like giving the rookie reporters the plum assignments without first having to attend school board meetings.)
However, Yenter acknowledged it is getting to the point that might have to be considered, noting she herself likely will not be taking any activity trips this school year.
Coaches have been utilized taking the smaller buses for sporting events. The board was told, though, that is not ideal as some coaches would rather not have to drive, and it adds another responsibility to their duties. It also was noted it would be tough to do that when football resumes in a few weeks.
That led to discussion about possibly cutting down on traveling squads, and that some school districts have cut back on sub-varsity contests in part because of a lack of drivers.
The board was told that some solutions might be expanding the “walking zone” for in-town students, creating hubs in the countryside where the parents have to take their children to in order to catch the bus and be picked up.
“We are having a very difficult time covering the routes, and that is without sports trips,” Yenter said.
Ross reiterated that raising the pay might at least attract some interest, and would be beneficial if it attracted even just one more driver.
Chrisman said she would look at the numbers in regards to raising the bus drivers’ pay and report it to the board.
In other transportation news, the board approved accepting bids for vehicles the district no longer uses, including two buses with wheelchair lifts, a red Suburban and an Aerostar.