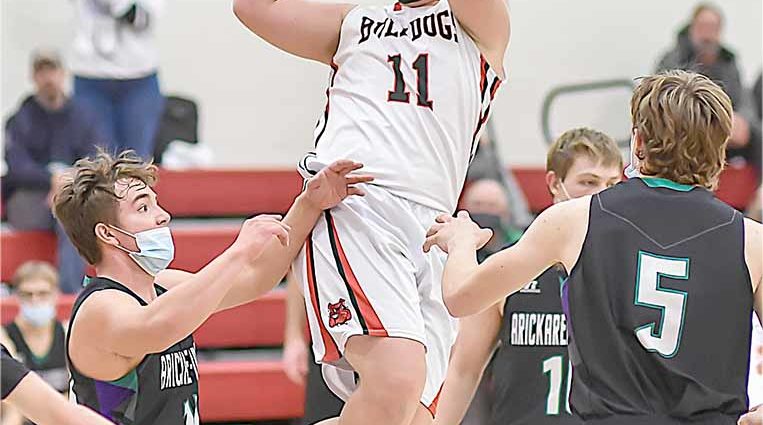 Otis boys and other 1A reports

The Otis High School boys basketball team is wrapping up this most unusual Season B on Saturday.
The Bulldogs will play Prairie at home. They first were scheduled to play in Briggsdale, but the school announced Wednesday the game had been moved to Otis. They had two wins entering this week, which included a home game this past Tuesday against Haxtun, making them an extreme long shot to advance to the 24-team playoff field that will be announced Monday.
Otis was at home this past weekend, first losing 56-51 to Peetz. The Bulldogs tried to rally after falling behind 33-20 with a strong third quarter, but could not keep closing the gap in the fourth quarter.
Carter Wells had 21 points, Jack Willeke 11 points and 10 rebounds, Peyton Wells seven points and four rebounds, Tyler Reynolds four points, six rebounds, six assists and three steals, Sawyer Packer four points, two assists and two steals, Taylor Ringlein two points and two steals, and Erick Thorn two points and two assists.
The Bulldogs hosted an excellent Flatirons Academy team on Saturday, losing 55-14. Willeke had six points and eight rebounds, P. Wells five points and eight rebounds, and C. Wells three points. Reynolds chipped in four rebounds, Mason Metzler two steals, Chase Glosson two rebounds, and Thorn four rebounds.

Postseason looking good for Lone Star girls
A postseason berth is looking good for the Lone Star girls basketball team.
The Longhorns are looking good in all the “metrics” that will be used to determine the 24-team playoff field, which will be announced officially on Monday, March 8. The criteria includes the MaxPreps ranking, where Lone Star is No. 14, the Rating Percentage Index, also No. 14, the Packard Rankings, No. 15, and the coaches poll on CHSAANow.com, No. 15.
The Longhorns enter the final weekend of the regular season with a 7-3 record, 4-0 in the YWKC League. They close out the regular season at home Friday against a tough Fleming team, then host Weldon Valley on Saturday.

Lone Star boys
It took awhile, but the Lone Star boys basketball entered this week on a three-game winning streak.
The Longhorns entered the last week of the regular season 2-2 in the YWKC League, and 3-6 overall. They were at Flagler this past Tuesday, then close out the shortened Season B with a game against Bethune today, March 4, and home games against Fleming on Friday and Weldon Valley on Saturday.
The Class 1A 24-team playoff field will be announced Monday, March 8.
Lone Star might not have much of a chance to reach the postseason, but the Longhorns have finally got to enjoy a winning streak. It began with a 52-29 win at Otis on February 23, and continued with a 42-24 win at Arickaree/Woodlin last weekend, and a 51-42 win at Prairie this past Monday.
The Longhorns dominated in their win at Arickaree/Woodlin, leading 22-13 at halftime and 35-17 after three quarters.
Brady Kuntz had 19 points and 12 rebounds, Liam Garza eight points, five rebounds, three assists and three steals, Zaiah McMeekin six points, four rebounds and three steals, Dakoda Cox four points and two rebounds, Wyatt Cochran three points, and Ethan Glenn two points. Abraham Martinez chipped in four rebounds.
Lone Star then took care of business on the Prairie Mustangs’ homecourt, Monday night, winning by nine points. Garza and McMeekin scored 13 each, and Kuntz chipped in 11 more for the Longhorns.

S/L girls have .500 season in their sights
The Stratton/Liberty girls basketball team might have a shot at sneaking into the Class 1A 24-team playoff field, but any hopes will hinge on beating Idalia at home on Saturday.
Even then, it might be a tall order, as the Knighted Eagles sit at 6-7 entering the season finale.
They ran into a tough Fleming squad last Friday, losing 60-10 after falling behind 30-0 in the first quarter. Kennedy Frank had seven points and six rebounds, Mattie Course two points, and Saylor Dempsey one point and three rebounds. Lauren Thompson had seven rebounds, Hannah Ribirozzie three rebounds, Emma Bohnen four rebounds, Rayanne Griffin three steals, and Madison Tagtmeyer three steals and two rebounds.
Things were much better Monday when the Knighted Eagles posted a 40-19 home win against Denver Waldorf. Knighted Eagles statistics were not available at press time.

A/W boys could finish with winning record
The Arickaree/Woodlin boys entered the final weekend of the regular season with a shot at finishing with a winning record.
The Mustang Indians were 4-4 overall heading this Wednesday’s home game against Idalia, before closing out the regular season Friday at home against Hi-Plains, then playing at Class 2A power Wray on Saturday.
Arickaree/Woodlin picked up a forfeit win against Bethune, but then suffered a 42-24 home loss to Lone Star last Friday. The Indian Mustangs fell behind early and never could recover.
Logan Wright had 11 points and seven rebounds, Samuel Koolstra six points and 11 rebounds, Tristin Niccoli three points and 14 rebounds, Bryce Shaffer two points and two rebounds, and Jacob Jefferson two points. Nichola Hermes had three rebounds and two assists, and Hayden Page two rebounds.

Two games left for A/W girls
The Arickaree/Woodlin girls have two games left in the 14-game Season B.
The Indian Mustang will end up with 10 games, hosting Idalia on Wednesday before closing it out at Hi-Plains on Friday, followed by a trip to a tough 2A Wray team on Saturday. They entered this week 3-4 overall.
They lost at home last Saturday to the Lone Star Longhorns, 56-21. Arickaree/Woodlin statistics were not available by press time.