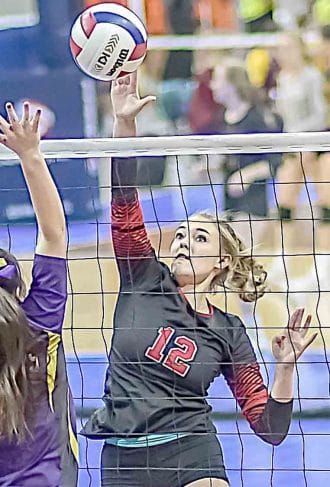 Otis made nice run in 1A tourney

The Otis Bulldogs earned themselves a place at the Class 1A State Volleyball Tournament held at the Denver Coliseum last Thursday through Saturday, and made a great run at the Big Show..

The Bulldogs went in as the 10th seed, sneaking in as a wildcard after losing to No. 3 Genoa-Hugo in regional.

The tournament is a double elimination tournament up until the semifinal round.

The first match was on Thursday against the South Baca Patriots, who came in as the No. 7 seed. Otis has a reputation of being a tournament team — meaning they play their best in the postseason tournaments. This match was proof of this. The Bulldogs were determined to win and move on in the winners’ side of the bracket. They set out to win and fulfilled their expectations by winning in three sets 25-19, 25-21 and 25-14.

The biggest upset early in the tournament was in the next match, also held on Thursday. They Bulldogs faced the second-seed Kit Carson Wildcats. Most people thought Lady Bulldogs would suffer their first loss of the tournament, but that is not what transpired. The Bulldogs played hard and took care of the defending state champions in three sets 25-21, 25-21 and 25-11. It was a great, unexpected win that solidified the determination of the Bulldogs.

They were back on the Coliseum floor on Friday to play the Briggsdale Falcons in a Winners Bracket match. The Bulldogs were ready for a tough fight, and even won the first set 25-20. Unfortunately it went downhill from there. Otis got ruffled, and lost the next three sets 22-25, 22-25 and 23-25. It was a tough fight and a tough loss.

The next match for the Bulldogs was Saturday morning in an Elimination Bracket match against the fourth-seeded Fleming Wildcats. The Bulldogs knew they needed to win, and they laid everything on the line. They fought hard, but just couldn’t get past the Wildcats! Otis lost in three 20-25, 18-25 and 12-25. It was another tough loss; unfortunately this loss put them out of the tournament.

Fleming went on to win the 1A championship that evening.

The tournament didn’t turn out the way the Bulldogs had hoped, but they had a great season and should be very proud of themselves.