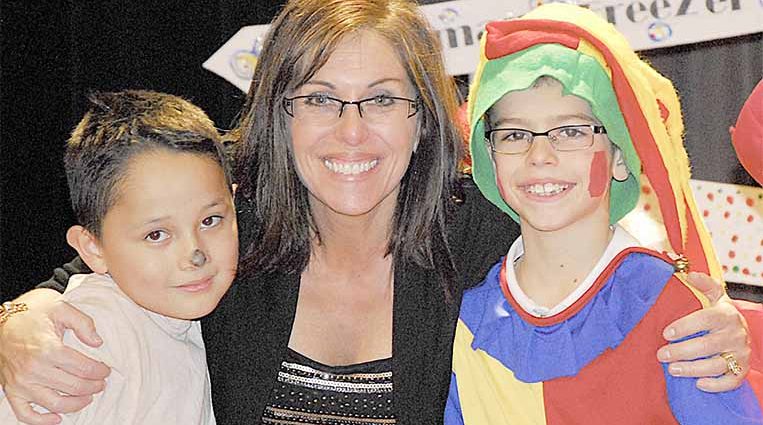 It has been a challenging time, to say the least, for Vicki Bushner over the past few months.
Not only has she been dealing with the COVID-19 pandemic restrictions like the rest of us, she also has been taking care of her elderly parents, and also has retired after a long career as the popular K-4 music teacher at Morris Elementary School.

Her long career came to an end at the end of the school year, earlier this month, but she has not seen her students in person since March, and did not have an opportunity for a proper goodbye.
“I’m sad I didn’t get to hug them, tell them goodbye personally,” she said late last week.
Bushner said a big spring production was planned with the MES students, who were ready to get started on it after spring break. However, that was when the novel coronavirus hit Colorado, and schools throughout the state were forced into remote learning for the rest of the school year.
Bushner did get to teacher her students via Zoom, but never was able to get back together with them before her retirement.
“This is the way it is,” she said. “It’s not something I’d ever dream would happen.”
Bushner said she had been thinking about retirement, but circumstances helped make it a reality.
Her mother, who lives in Steamboat Springs, was diagnosed with pancreatic cancer earlier this year, and her father, who was in an assisted living facility, passed away on April 7. She has spent much of her time in Steamboat looking after her mother, while also doing classes via Zoom.
“It’s been a tough few months,” Bushner said. “At least I got to teach the kids online. That helped me a lot. Helped keep me sane.”
She grew up in Steamboat, and earned her degree in education at the University of Northern Colorado. She met her husband, Trent, on the ski slopes in Steamboat. Trent, a Yuma native, was a vo-ag teacher coming out of college.
They first lived and taught in Arizona for three years. Vicki was a second-grade teacher while in Arizona. She said her plan always was to be a classroom teacher.
However, when the Bushners moved to Yuma there were no opening, as there was very little turnover among the elementary teachers. Therefore, she did a lot of subbing, at one point agreeing to being a long-term sub for music.
“I absolutely fell in love with it,” she said. “I get to teach the kids something I love, music.”
So she went back to school for her music education certificate. Principal Carla Seavey then hired her, and she has been at Morris for 27 years, first starting out at the old North School, then moving into the new Morris Elementary School about 15 years ago.
“It’s great to get up every morning and do what you love,” she said.
Vicki and Trent raised two children in Yuma, Brianna and Dakin, who are now grownup and married, with Dakin and his wife expecting a child. Plus, the Bushners own and operate Tumbleweed Brewery in downtown Yuma.
All of that also has helped convince Vicki now was the time to retire, noting she wants to spend more time her kids and their families, and also loves working at the pub.
That does not mean the decision has been easy.
Though she grew up in Steamboat Springs, Yuma is “home to me. I love Yuma. We are so fortunate to have the community we have.
“I am going to miss the kids and the hugs,” she continued. “It is never boring when you teach. I love Morris Elementary and everybody I worked with there. They are my family.”