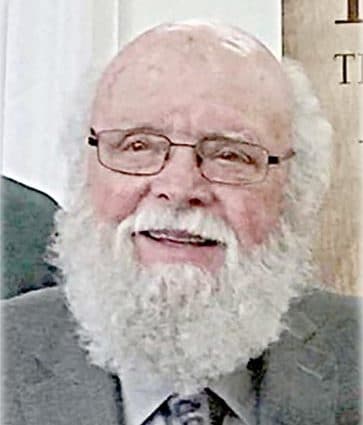 Stan Fisher was born near Beecher Island, Colorado on August 24, 1936, to Loren and Cora (Trembly) Fisher. He was the fourth of seven children.
Stan Attended country school until he started high school in Wray.
During this part of his life, Stan was active in the Dry Willow 4-H Club, and president of the Yuma County 4-H council.
In 1954, Stan graduated Wray High School. Following his high school graduation, he attended Colorado A & M, graduating in 1958 as the first class from the newly renamed Colorado State University.
He was baptized in his youth, and later, confirmed in the Lutheran church in 1957.
On September 8, 1957, he married his high school sweetheart, Barbara Ann Utz. The Lord blessed this union with three children, Jeff, Julie, and John.
In June 1958, Stan began his 21-year career in the United State Air Force, working in accounting and finance. His last assignment was Director of Accounting and Finance for the US Air Force Reserve at the Pentagon. He retired from the Air Force in April of 1979.
Stan and his wife purchased Renotta Nursing Home in Wray in 1983 and in 2001 realized his long-time dream of opening a state-of-the-art community owned skilled nursing and assisted living facility, Hillcrest Care Center, and the Towers.
He was an active part of the Colorado Health Care Association and was on the board for a total of 18 years. In 2001, he received the honor of Colorado Health Care Association Administrator of the Year.
He retired from Healthcare after 20 years.
In retirement, Stan spent his time as an active member of his community in both Wray and Holyoke. He was dedicated to his work in this church, the school systems, and the American Legion. He was also active in the Wray Rotary Club and continued to announce football games for Wray High School until 2017.
For a number of years, Stan took on the role of Santa, and used it as a service to many communities, for both young and old.
In failing health, Stan went to be with Jesus on April 19, 2021.
Stan was preceded in death by his parents, his brother, Everett Fisher, sisters, Nettie Jane Sheldon and Gracie Trast, and granddaughter, Krista Joy.
Stan is survived by his wife, Barb Fisher, children, Jeff Fisher and family, Julie Haake and family, John Fisher and family, siblings, Vi Beverlin and family, Doris Osmus and family, Eldon Fisher and family, and a host of nieces and nephews, extended family, and friends.
Visitation/Viewing was held on Friday, April 23, 2021 from 10:00 a.m. to 5:00 p.m. at Schmidt-Jones Funeral Home, 427 Adams Street, Wray, Colorado.
Funeral Services were held at the Zion Lutheran Church, 240 S. High School Avenue, Holyoke, Colorado on Saturday, April 24, 2021 at 10:00 a.m. with Pastor Gary Rahe officiating.
Interment was held in the Holyoke Memorial Park Cemetery in Holyoke, Colorado.
Memorials may be made to the Zion Lutheran Church – Holyoke, Colorado, Melissa Memorial Hospital Foundation in Holyoke, Colorado or the Wray School District Education Foundation in Wray, Colorado.
Schmidt-Jones Funeral Home in Wray, Colorado was in charge of arrangements.