The Stratton/Liberty volleyball team is back in the Class 1A State Tournament for the first time since midway through the last decade.
The Knighted Eagles capped a great run in the shortened Season C by sweeping past South Baca and Dove Creek in the 1A Region 5 Tournament, held last Saturday in Stratton, qualifying for the state tournament, May 12-13 at the Broadmoor World Arena in Colorado Springs.
Stratton/Liberty, 15-1, is the fifth-seed in the eight-team state field. The Knighted Eagles will play fourth-seed Simla, 16-0, in the 2 p.m. quarterfinal, Wednesday.
The state tournament in Season C will be a straight-up eight-team bracket, with winners advancing and losers being done.
The Stratton/Liberty-Simla winner will be the winner of the quarterfinal between top-seed Fleming and eighth-seed Otis, Thursday in the “Breakfast at the Broadmoor” 8 a.m. semifinal. The championship match is set for 5 p.m. Thursday.
This year’s Stratton/Liberty team has the cooperative’s best winning percentage in volleyball, losing just once in 16 matches.
The Knighted Eagles went 13-1 in the regular season to earn the right to host regional, last Saturday in Stratton. They took full advantage of the home court, beating 20th-seed South Baca in four sets, then sweeping 12th-seed Dove Creek.
South Baca actually won the first set, 25-23, but the Knighted Eagles regrouped to win the next three, 25-8, 25-22 and 25-16.
Kennedy Frank of Liberty led the home team with 13 kills, while McKenna Notter had 11, Hannah Rigirozzi nine, Lucero Ontiveros eight, and Mattie Crouse six. Ontiveros was in on seven blocks. Crouse had 34 setting assists. Crystal Bouchier led in serve receive and digs. Bouchier was 29-29 serving with three aces, Madison Tagtmeyer 20-20 with one ace, Crouse 16-16 with one ace, Emma Bohnen 14-15 with one ace, Ontiveros 7-9 with two aces, and Frank 7-7. 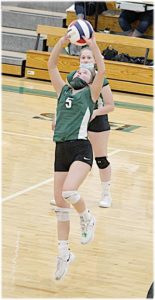