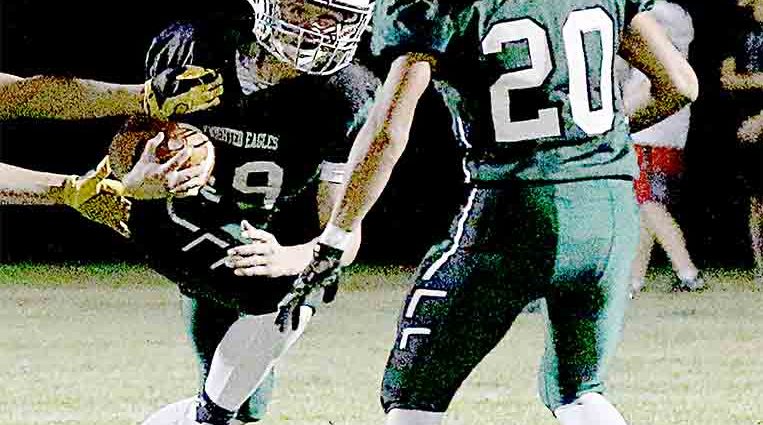 Stratton/Liberty had another great season

The Stratton/Liberty Knighted Eagles gave it a good battle but simply ran into an excellent Fleming Wildcats squad, last Thursday in the 6-man state championship game at CSU-Pueblo.

The Knighted Eagles kept it close early, but Fleming eventually pulled away to a 60-28 victory. It was the second straight year the Wildcats beat Stratton/Liberty in the championship game. Stratton/Liberty has been in four consecutive finals, with one title during that span.

“Fleming was a very good team and they out played us on Thursday,” coach Toby Kechter said. “We are very proud of our team; they had a wonderful season and we look forward to next season.”
It was a sunny and warm December afternoon, last Thursday in Pueblo for the first of seven championship games played over three days. The college field was set up for 6-man, which has a shorter and less wide field, including temporary goal post set up for the game.
A total of 75 spectators were allowed for each team.
Alex Cruz scored on a 30-yard run, and Braden Wedel kicked the 2-point conversion for an early 8-0 lead.
Fleming immediately answered with a 55-yard TD run, and the 2-point kick tied the game at 8.
Stratton/Liberty came right back with a nice drive capped by Cruz’s 11-yard TD run. However, a bad snap on the extra-point attempt kept the score at 14-8 with 30 seconds left in the first quarter.
Fleming answered again with a 50-yard TD run, and the 2-point kick was good for a 16-14 Fleming lead at the end of the first quarter.
Fleming kicked a 31-yard field goal early in the second for a 20-16 lead.
A series of events in the final minutes definitely turned the tide in Fleming’s favor.
Stratton/Liberty came up one yard short on fourth-and-goal from the 4-yard line.
Fleming scored on the next play on a 79-yard run, and the 2-point kick made it 28-14.
Another Stratton/Liberty drive was halted by an interception in the end zone.
However, Tyler Hase stripped the ball on the next play, and Stratton/Liberty recovered on the 3-yard line with time for one last play.
It appeared Cruz was going to score, but he stumbled on the turf and fell short of the end zone, leaving Fleming ahead 28-14 halftime.
“We came out strong scoring on our firsttwo possessions but couldn’t score three times in the red zone in the second quarter,” Kechter said. “The turf hurt us a little with slipping that cost uone for sure touchdown.”
The Knighted Eagles tried to stay in it with Charlie Clapper scoring on the first play from scrimmage in the third quarter to get within 28-20.
However, back came Fleming with a scoring drive and 2-point kick for a 36-20 lead. After a Stratton/Liberty fumble, the Wildcats scored again and got the 2-point kick for a 44-20 lead after three quarters.
Clapper had another long touchdown run in the fourth, but Fleming kept scoring.
(In the) second half whenever we got some momentum we turned the ball over or got a penalty that we couldn’t overcome,” Kechter noted. “We moved the ball well the entire game but couldn’t punch it in when we needed a score. Defensively we couldn’t stop Fleming when we needed to.”
The Stratton/Liberty players went into the stands to hug their family members after their game, concluding another great run for the Knighted Eagles.
“Id like to thank our two seniors Tyler Hase and Jaret Lichty,” Kechter shared. “Tyler was a three-year starter and huge part of our success the last three years. Tyler played very hard every play and was in our opinion the best lineman in the state. Jaret was a four-year starter and a big reason for our success. We wish we could of seen him play more this season but feel grateful for the games we did watch him play. His work ethic is second to none and we feel grateful to have both Tyler and Jaret as role models for our younger players.”
Clapper finished the game with 173 yards rushing and two touchdowns, Cruz 145 yards and two touchdowns, Riggin Williams 40 yards and Dawson Thompson seven. Charlie Tagtmeyer completed three of seven passing attempts for 29 yards and had one interception. Hase had two catches for 26 yards, and Cyler Notter one for three yards.
Defensively, Williams was in on 11 tackles, Clapper eight, Hase seven, Logan Breyer six, Cruz five, Will Witzel two, and Riley Shean, Notter, Joe Shean and Clayton Craig one each.
“Special Thanks to Jesse McConnell and Christian Hornung for their time and efforts,” Kechter said. “I’m so blessed to have such wonderful assistant coaches. I love and appreciate them very much and they are a big reason we’ve had the success we’ve had the last 5 years.
“Thanks to our players, stat keepers, chain gang, clock keepers, announcers, administration, parents and community for their support through this season.”