Play ball!
The City of Yuma’s plan for summer recreation at the Jeff Armstrong Ball Field complex was approved by the Yuma County Task Force last Friday.
Registration was this week, and games will begin next week. The leagues will last for six weeks.

Girls softball will play on Mondays, T-ball on Tuesdays, 9-12 baseball on Wednesdays, and co-ed baseball for ages 7-8 on Thursdays.
The fields will be available from 5 to 6:30 each day. Some of the time will be spent practicing, followed by scrimmage games.
Adult Co-ed Softball will play on Mondays and Wednesdays, starting at 7 p.m. both days. That league will use two fields that were not used earlier on those nights.
The concession stand will not be open this summer. The bleacher areas will be closed. 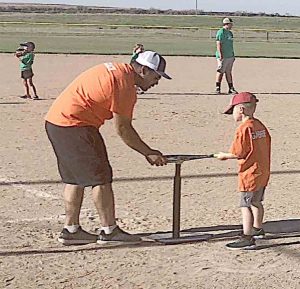 Parents and other spectators are being asked to watch the games from their vehicles behind the outfield fence. However, the city will provide areas marked six feet apart, if parents want to bring chairs and sit in the grassy areas beside the fields.
There will be no more than 25 people on the field, including players, coaches and umpire. There will be defined areas six feet apart for players in the dugout, and will extend outside the dugout along the protective fence.
Players are being asked to bring their own gloves, helmets, batting gloves and bats if possible. The city will provide individual helmets and bats for each dugout for players that do not have them. Helmets will be numbers so players will use only their helmet. Hand sanitizer will be provided in each dugout.
After the games, all the dugouts, bathrooms, drinking fountains and any equipment that is used will be sanitized.
There are several points for participant and employee conduct and monitoring, as well as responsibilities asked of the parents.
Employees will wear a cloth face covering.
Staff and coaches are asked to wash their hands frequently, using alcohol-based hand sanitizer.
The parents are being asked to conduct daily health checks, monitoring symptoms and temperature of their child. If a child is sick or showing signs of being sick, the child will not participate in any activities with others.
A child may return to play after at least 10 days have passed since symptoms first appeared, and has no fever for at least 72 hours without the use of medication.
Each night the coaches will turn in a list of all who played in the games.