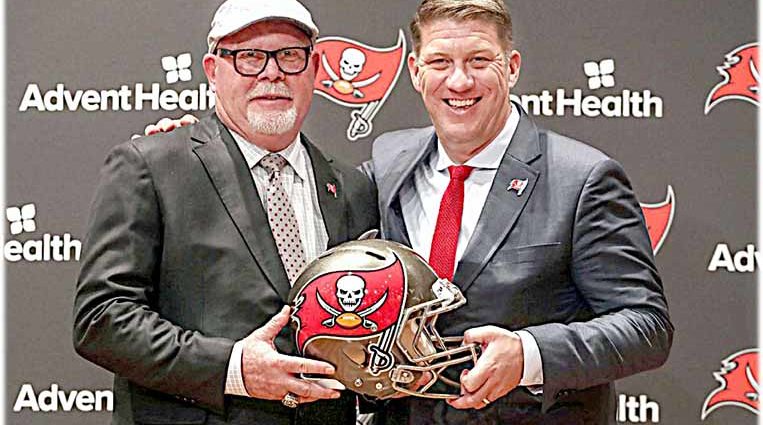 The Buccaneers have seen the Licht

Jason Licht is getting to stay at home throughout Super Bowl Week even though his team is in the big game.
That’s because the Yuma High School graduate’s Tampa Bay Buccaneers are the first team ever that will play the Super Bowl in its home stadium — thanks to beating the Washington Football Team, New Orleans Saints and Green Bay Packers on the road in the playoffs.

Licht has been the Bucs general manager since January 2014. It was a long road to get to that point for the 1989 YHS graduate.
And it has been a long road in the past seven years turning the perennial-losing Buccaneers into a Super Bowl team.
Yet, here he is, one win away from football’s ultimate championship.
Licht moved to Yuma in the 1970s when he was in kindergarten with his parents, Ron and Karen Licht, and older sister Patti. He spent all of his school years in Yuma, excelling academically and athletically.
In an interview with the Pioneer in July 2015, that growing up in Yuma helped get him to where he is today.
“Actually, being from Yuma does help,” he said at the time. “You are actually at an advantage coming from a small town, from Yuma, you just don’t realize it at the time.
“It forces you to dream some, to take some chances,” he said. “If I had two candidates for a job that are basically equal, and one was from a small town, I would take that person because it helps set them apart.”
Licht was a walk-on for his beloved Nebraska Cornhuskers, playing enough as a redshirt sophomore to earn a varsity letter. However, he wanted to play on a regular basis, instead of being behind future NFL players on the depth chart, so he transferred to crosstown Nebraska-Wesleyan. He was an all-conference defensive tackle for two years at the Division II school.
After college, Licht got into scouting in the National Football League, smartly getting jobs with franchises featuring top-level coaches. He worked for a literal Who’s Who of NFL leaders — Bill Belichek, Andy Reid, Jimmy Johnson, Don Shula, Bruce Arians, and Pete Carroll.
Licht said he learned a lot from all of them, such as leadership and delegating authority from Reid — whose Kansas City Chiefs will face off against Tampa Bay in the Super Bowl — and evaluating players from Belichek. He worked under Reid in Philadelphia, and had two stints with Belichek’s New England Patriots. Licht was with the Patriots, Eagles and Cardinals when they advanced to the Super Bowl.
His second stint with the Cardinals was in 2013. He worked directly with head coach Bruce Arians, and the general manager on player acquisition and contract negotiations, as well as leading the club’s scouting as he oversaw both the college and pro scouting departments.
What Licht told the Pioneer in 2015 foreshadowed the coaching change he finally made after the 2018 season..
“The guy I got the most out of was Bruce Arians,” he said then. “I learned from him there are different ways to skin a cat. Belichek and Reid put in the long hours; Arians does too, but he has fun along the way. I took from him that you have to be yourself.”

Judging from his many televised interviews through the years — as well as his appearances on HBO’s “Hard Knocks” when the Bucs’ training camp was featured a few years ago — Licht definitely has remained true to himself, including his great sense of humor.
During all this, Licht also became a family man. Licht and his wife Blair and have three children, sons Charlie and Theodore, and daughter Zoe. There has been sadness, as well, as his father Ron — Jason’s biggest supporter — passed away in the fall of 2019. The Buccaneers pulled off a surprising win in the game following his death. (Ron and Karen moved back to Lincoln, Nebraska, decades ago.)
It has been an interesting ride during Licht’s time as the Buccaneer’s GM.
Tampa Bay went 2-14 in his first year. That earned the Bucs the top pick in the 2015 draft, which was used on Florida State star Jameis Winston.
Licht has shown a willingness to make the tough decisions as GM. Lovie Smith — who was hired before Licht — was fired as coach after a couple of seasons, and offensive coordinator Dirk Koetter was elevated to head coach. However, that did not completely pan out as Winston continued to have a propensity of committing turnovers.
Koetter was let go after the 2018 season. Licht hired that man he had praised so fondly several years earlier — Bruce Arians.

Winston threw for more than 5,000 yards and 30 touchdowns, but also threw 30 interceptions. Arians had seen enough and wanted to move on — Licht let his coach do what he thought was best.
Meanwhile, Licht and his staff were meticulously building a strong roster through the draft and trades. Sure, he infamously drafted kicker Roberto Aguayo in 2016. Aguayo struggled and after just one year, Licht owned the mistake and cut him, moving on to more important developments.
His drafts through the years have included wide receivers Mike Evans, Chris Godwon and Scotty Miller (Packers fans remember him), offensive linemen Tristen Wirfs, Donovan Smith and Ali Marpet, defensive tackle Vita Vea, linebacker Devin White, and defensive backs Antoine Winfield, Jr., Sean Murphy-Bunting, Carlton Davis and Jordan Whitehead.
He signed former CSU Ram and Denver Bronco Shaquil Barrett as a free agent, along with defensive tackle Ndamukong Suh, and traded for pass rusher Jason Pierre-Paul.
All key players on the Super Bowl-bound Bucs.
Building such a strong roster led to the most famous haul of all last off-season.
Signing living legend Tom Brady — he of nine Super Bowl appearances and six championships during 20 years with New England.
Getting Brady led to Ron Gronkowski coming out of retirement and being traded to Tampa Bay. Licht signed running back Leonard Fournette just as the season began.
The Buccaneers did have some rough patches midway through the season, but they got those straightened out. Now here they are in the Super Bowl, going up against one of those other legendary coaches he once worked for — Andy Reid.
And Licht gets to stay home with the family all week.
No doubt most in his old hometown of Yuma will be behind him all the way — except for all those pesky Chiefs fans.