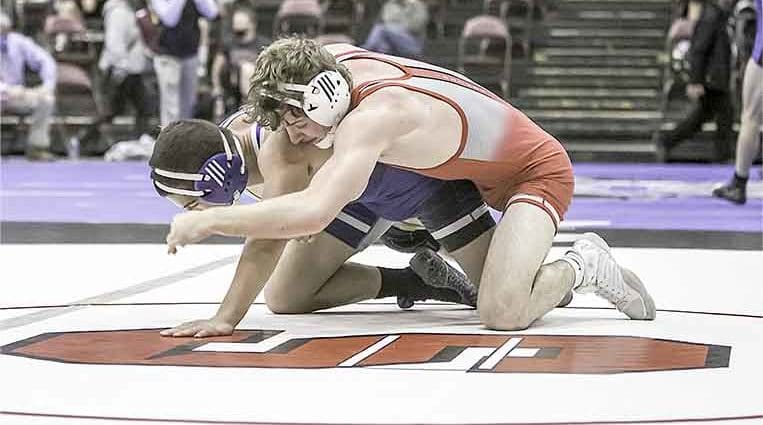 Wins were tough to come by at state

It was kind of a tough go of it for the Smith boys at the Class 2A State Wrestling Tournament, last Friday in Pueblo.
Both Yuma High School wrestlers went 1-3 in the one-day event, placing sixth in their respective weights — John Smith at 120 and Braden Smith at 132.

Last Friday was the culmination of a different kind of season, thanks to COVID-19. Only duals, no actual tournaments, were wrestled during the regular season that began the last week of January. The first actual tournament was regional, and that still was different with half the weights competing one day, and the other half the next. Plus, only the top two placers in each weight — instead of the usual four — qualified for state.
State itself was shrunk from its usual all-classification three-day wrestle-palooza held at Pepsi Center (now Ball Arena), to a one-day state held in the Southwest Motors Events Center on the Colorado State Fairgrounds. The girls first-ever sanctioned tournament was held Thursday, followed by boys 2A and 3A on Friday, and boys 4A and 5A on Saturday.
The YHS qualifiers were on the mat shortly after 9 a.m. last Friday.
John Smith took on Lane Hunsberger of Cedaredge. He battled the fellow junior but eventually was pinned in the third period.
It turns out Hunsberger went on to knock off Brady Collins of Wray in the championship match.
Smith fell into the consolation round, where he earned a 3-0 decision over Trae Kennedy of Meeker.
Braden Smith opened at 132 against Alex Torres of Las Animas. It was a close battle most of the way, but Smith ended up losing a 6-3 decision.
He turned around in the first round of consolation with a 11-2 major decision over Cyrus Sandoval of Centauri.
The consolation wins guaranteed a top-six finish and a state medal for the Yuma wrestlers, with a chance to finish as high as third.
However, Braden Smith lost in the consolation semifinals, getting pinned by Buena Vista’s David Arellano. He ran into Torres again in the fifth-place match, losing a 5-1 decision to finish sixth. He finished the year with an 11-7 record.

The senior had missed most of the regular season due to injury, but returned just in time for the last week of the regular season, and then made a great run in the postseason, including winning a regional title.
John Smith lost a 5-0 decision in the consolation semifinals to Eddie Bowman of John Mall, and then lost 8-0 to Daniel Apodaca of Dolores Huerta, finishing sixth. The junior finished the season with a 21-8 record.
It was kind of a tough go all around, relatively speaking, for Yuma County wrestlers.
The Wray Eagles came up short of winning their fourth straight 2A team title. Centauri claimed the title with 104 points. Cedaredge was second with 99, and Wray third with 94.
Wray senior Tyler Collins won the 152-pound title. Wray had two second-place finishes.
Yuma finished 27th in the team standings with nine points.

(This article has been updated from the print version to accurately reflect the boys tournament was on Friday, not Thursday.)