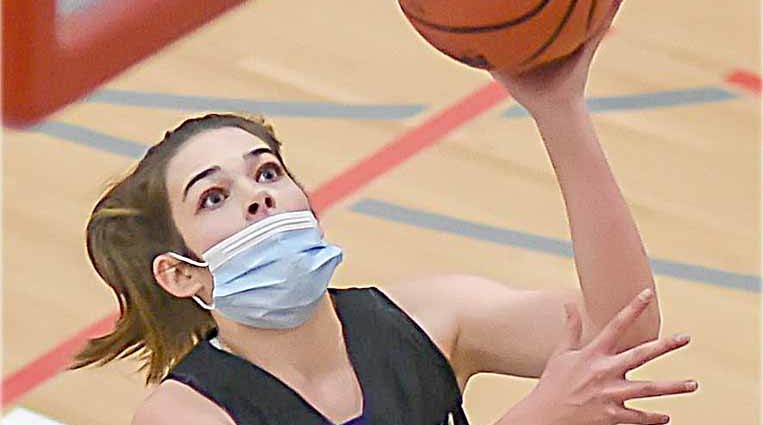 Lone Star gets first win
The Lone Star girls basketball team got into the win column this past Tuesday with a 50-20 home win over Idalia, following a rough start to its season, last Saturday.
They host Otis today, February 4, and host Briggsdale on Tuesday.
Lone Star led Idalia 21-15 at halftime, this past Tuesday, then gradually pulled away in the second half with a 29-15 advantage in the second half.
Alivia Weathers had 17 points, eight rebounds, four assists and four steals, Alison Davis 15 points and six rebounds, Andrea Kuntz eight points, eight rebounds, three assists and three steals, Lamya Kuntz eight points and six rebounds, Jayna Lockard two points, six rebounds, three assists and two steals, and Idahly Martinez five rebounds.
The Longhorns opened the season ranked No. 7 in Class 1A, but dropped to No. 15 in this week’s poll after a season-opening loss, 67-40, at Flatirons Academy in Westminster, last Saturday. Flatirons moved from No. 10 to No. 7 in this week’s poll.
Lone Star ran into a buzzsaw in the first quarter, getting outscored 20-4. The Longhorns played the Bison fairly even in the second quarter, 15-14, but were outscored 32-22 in the second half.
Weathers had 19 points and five steals, A. Kuntz seven points and three rebounds, Davis six points and three rebounds, Martinez five points and two rebounds, Lockard three points, L. Kuntz three rebounds and Aleighcea Kuntz two rebounds.

Arickaree/Woodlin gets early-season wins
Arickaree/Woodlin’s girls basketball team enjoyed the start of the 2021 season with a pair of wins last week. The Indian Mustangs now are at Hi-Plains on Friday for a league game.
The Indian Mustangs rallied from an early deficit at Otis, last Thursday in the season opener, outscoring the Bulldogs 17-1 in the second quarter on their way to a 45-25 win.
They shot 37-percent from the floor, and made five of seven at the charity stripe.
Joslyn King had 15 points and seven rebounds, Karina Ruiz eight points, Wynter Van Ness six points, four rebounds and three steals, Julisa Quinteros six points and nine rebounds, Cora Schrock four points, two rebounds and two steals, Tori Arfsten two points and four rebounds, Lilly Monat two points and five rebounds, and Dannica Kalcevic two points and four rebounds.

Stratton/Liberty gets first win
The Stratton/Liberty girls earned their first win of the season this past Tuesday, 52-38 at Evangelical Christian in Colorado Springs.
The Knighted Eagles have more tough contests coming up as they host 2A power Limon on Friday, play Cheyenne Wells on Tuesday, then play another tough 2A squad in Burlington on Tuesday.
Stratton/Liberty, 1-1 built their lead through the first three quarters, Tuesday. The Knighted Eagles led 11-6 after one quarter, 22-13 at halftime and 39-23 after three. Statistics were not available yet.
They opened the season last week with another tough opponent, Class 1A fourth-ranked McClave. The visit south was a rough one as the Cardinals handed S/L a 66-36 loss. The home team led 23-13 by the end of the first quarter, and kept increasing its lead throughout the game.
Emma Bohnen led the Knighted Eagles with 11 points and six rebounds, while Hannah Rigirozzi had eight points, four rebounds and three steals, Saylor Dempsey four points, Rayanne Griffin four points and two steals, Crystal Bouchier three points and three steals, Mattie Crouse two points and four assists, Madison Tagtmeyer one point and two rebounds, Lauren Thompson five rebounds and Kennedy Frank five rebounds.

Otis keeps battling
The Otis High School girls basketball team will be on the road two more times over the next week looking for some victories.
The Bulldogs opened the season last week with two losses, and were at Arickaree/Woodlin this past Tuesday night. They stay on the road Saturday at Flagler, and are at Weldon Valley in Weldona on Tuesday.