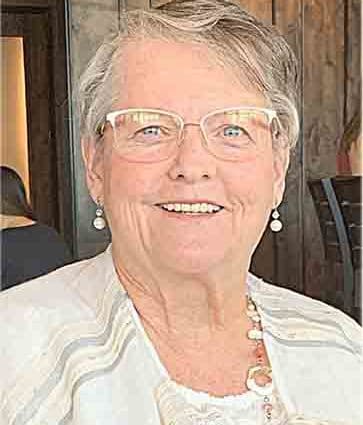 Barbara Jane Shepherd Olsen was born on August 15, 1939 to William “Bill” Shepherd and Lola McDougal Shepherd in Estes Park, Colorado and passed away unexpectedly at her home in Yuma, Colorado on July 30, 2020. She was raised in Yuma with her older brother Roger and younger sister Anne Shepherd Fletemeyer. She graduated from Yuma Union High School in 1957 and attended the University of Colorado before transferring to Colorado State University after she married her high school sweetheart Harold James “Jim” Olsen on August 30, 1959.
Jim and Barbara bought a farm north of Yuma where they began their family, and after four years moved to Houston, Texas where she lived for over 25 years. It was there that she and Jim raised their three daughters, Dana Diann, Jane Marie, and Andrea D’Lynn. She was a very involved homemaker and mother. She enjoyed leading her daughters Camp Fire Girl groups and volunteering as a homeroom parent and a church choir mother. She also had a creative side. She enjoyed china and oil painting, small quilting projects and baking homemade bread.
When the girls were out of middle school, Barbara began working outside the home for Bechtel Engineering, SOHIO and Kroger corporate headquarters. Later in Yuma, she worked for the Bank of Colorado and Edward Jones. While she enjoyed the professional world, she was always happiest being ‘the heart’ of her home.
After Jim’s death, when he was only 52, Barbara moved “back home” to Yuma, becoming a companion to her mother for 16 years, before Lola’s death. Barbara remained in Yuma and found comfort and joy from being close to Dana, Andrea, grandchildren, long time childhood friends, and many other dear family members.
Barbara accepted Christ at an early age and never wavered in her faith. She was an active and long-time member of St. John’s and Windwood Presbyterian Churches in Houston, participating as a leader in the Mariner’s organization and as an Elder. She continued strengthening her faith by becoming a Deacon, and serving on many committees and Session at First Presbyterian Church of Yuma. She thoroughly enjoyed bible studies outside of Church including those with her close-knit friends and family. Barbara was also a member of the P.E.O. Sisterhood for 51 years, serving in many capacities including President of her Houston Chapter. She also became involved in the Yuma Art Association and Progressive Women’s Club. A highlight for her was travel with her Mom to see the fall colors on the East coast, to Florida to visit daughter Janie, and an incredible trip to Europe with Andrea to visit Janie who lived In Hungary at that time.
Her in-laws, nieces, nephews and friends will remember Barbara as a woman who loved her family deeply with a warm welcoming spirit and smile. She enjoyed perusing recipes, cooking many delicious and memorable meals, which were a true gift to all. She took pleasure in entertaining, creating special desserts for her Mom’s bridge club meetings, and hosting family holidays and other events. Barbara was a woman of strong faith who continued to be a rock for many, especially her daughters.
She was preceded in death by her loving husband Jim, her parents Bill and Lola, and her brother Roger; her in-laws Harold and Margaret Olsen, and brother-in-law Don Olsen. Left to grieve her passing are her daughter, Dana (Kent) Josh, and grandson Cameron (Keriann) Josh and great-grandson Ryker, granddaughter Caroline (Fernando) Saenz and great grandson Fernando, granddaughters Cashlin and Kelleigha; daughter Jane (Zsolt) Kovacs and grandson Konnor; daughter Andrea (Rudy) Anzlovar; sister-in-law Bryer Shepherd and two children and families; and sister Anne (Jim) Fletemeyer and four children and families; brother-in-law Max (Joan) Olsen and four children and families; sister-in-law Charlotte Olsen and her two children and families.
An interment was held for family and close friends on Friday, August 7, 2020 with arrangements by Baucke Funeral Home, and led Pastor Jamie Fiorino. A Celebration of Life is scheduled for Wednesday, August 19, at 11:00 with Pastor Jamie Fiorino officiating at the First Presbyterian Church in Yuma, Colorado.