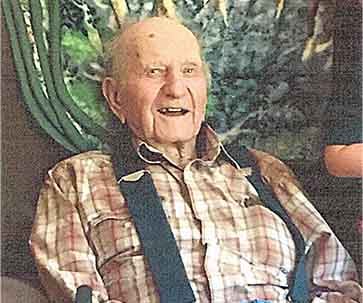 David John Henry was born on July 30, 1918 and passed to heaven on July 7, 2020, 23 days from his 102nd birthday. He was born to Jenny May Green and John Lilburn Henry on the homestead north of Joes, Colorado overlooking the Arickaree River. He grew up and lived within eight miles of this place for half his life.
He served in the United States Army Air Corp, during WWII and protected Panama Canal and was a bomb specialist helping protect the south shores of North America. He came home from the war to dry land farm and ranch with his elderly parents.
He married Mary Jane Bennett August 8, 1941. They were married for 74 years just before Mary’s death, September 14, 2015. They raised five children, Kathryn, Kenneth, Nancy, Jennie, and James. He was a 4-H leader for many years, and an expert welder on both acetylene and electric welders. He welded for the entire community. He was a good mechanic and overhauled his own tractors and combines and vehicles and often helped neighbors with their projects. He was a good, kind father and his children loved and honored him and hated to do anything that disappointed him. He loved to fish, but only got to do it once in awhile before he moved to Montana. He loved rock collecting and learned to cut and polish stones. He designed and built his own machinery for use in his fields. He read copiously and stayed up with the new trends in agriculture and implemented what he could. He loved nature all his life and taught his children to honor the natural things of this earth and to look, but not touch, the birds nest hidden in the grass. He taught us to put up our surplus for the long winter ahead and to love without judgement. They moved to Montana in 1966 and bought a ranch in the Ronan area. It was like they started the second half of their lives. It was David’s first try at irrigation. He did well with it. Sprinkler pipe hand lines and wheel moves were something new for him to learn and conquer. All his life he was discovering and learning. In Montana he could fish as much as he wanted and again took up hunting. His life revolved around this new way of farming, ranching and haying. Mary went from working with him on the farm to studying nursing and working at the hospital. David no longer needed her for a hired man and for the first time they had a monthly “paycheck” coming in that wasn’t involved with the ranching. She even worked in the beginning doing the potato harvest and planting. They also did fall specialty apple harvesting on Flathead Lake, where they hand packed apples. They sold the ranch in 1992 and moved to 20 acres north of Plains, Montana. They cleared land, drilled a well, and moved in a home to live in. He worked at the cemetery at Plains and made cement markers for the unmarked graves. Plum Creek nursery retired him at 80 and he went on to work for CSKT at the old Plum Creek holdings. He spent two months cutting and splitting firewood when he was 96, with the help of two of his children. He ran the chain saw. At 99 the state took away his driver’s license and though he understood why, he was not happy about it. The last couple of years he sorted lots of Phillipsburg gravel for gemstones. David did so many things in his 102 years of life, that we cannot tell it all. He was a wonderful giving person and we were lucky to have him. He is survived by his children; Kathryn and Carol(dec) McCalla, Kenneth and Helen Henry, Nancy and Hendrick(dec) Huigen, Jennie Henry, James and Terri Henry, ten grandchildren, eight great grandchildren, one great great grandchild and many step grandchildren, a favorite niece, Sarah Wilson, a nephew John Bennett and numerous relatives and friends. Special blessings and thanks to James for his care all the way to the end.