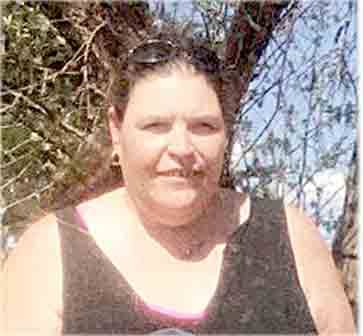 Debbie McGinnis was born in Wray, Colorado on March 29, 1970, the daughter of Larry and Vickie McGinnis. She passed away from cancer at UC Health in Denver on October 12, 2020 at the age of 50.
Debbie’s life took her to many places. She moved to Washington in 1982, and then in 1986 moved to Alaska, where she worked in the fishing industry. In 1987 she moved back to Denver. There she worked as a telemarketer, and in various other jobs.
In 1991 she moved to Akron. Her first daughter, Ariel, was born there in June of 1991. In 1994 she received her GED from NJC. Her twins, Cheyenne and Kylie, were born in January of 1995. Her fourth daughter, Joliene, was born in March of 2000. Debbie met Alan Sampson in 2006, and they enjoyed 14 years and many adventures together before her passing.
Debbie’s survivors include her father, Larry McGinnis and wife, Naomi, of Akron; her life’s partner, Alan Sampson of Eckley; her four children, Ariel Komer and husband, Ken, of North Carolina, and their children Krista and Dalton; Kylie Arenivas and husband, Paco, of Yuma, and their children, Gabriel, Emmanuel, Adaline and one on the way; Kylie Konsdorf and partner Cody Jones of Akron; and Joliene Konsdorf of Akron. She is also survived by her sisters, Rebecca Henson and husband, Mike, of Yuma, and their children Cole, Boen and Cody; Joanna McGinnis and husband, Matt Spear of Arizona, and their children Kieran and William; Daniel McGinnis and his wife, Marklynn, of Akron, and their children Colby, Greg and Ashley; and Jeremiah McGinnis and his children Alli Jo, Zach and Hyden of Arizona.
A memorial service will be held at the home of her sister Becky, at 35983 County Road C, Yuma, on Saturday, October 24 at 2 p.m.