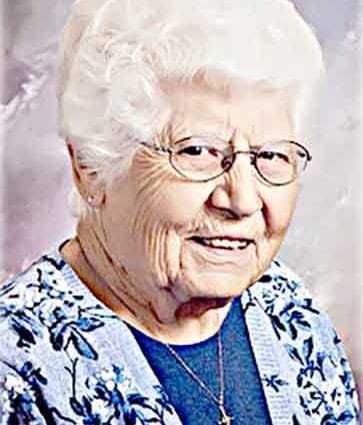 Dorothy I. (Dottie) Schmidt the oldest of eight children born to E. T. (Bud) and Lois B. (Richards) Spellman on July 23, 1927 in Wray, CO. She passed away on Friday, March 19, 2021 at Hillcrest Care Center in Wray, CO.
Dottie grew up in the Alvin community north of Wray attending Pleasant Valley District #22 Country School and graduated from Wray High School, Class of 1945. Because there was a shortage of teachers during the WWII era Dottie became a country schoolteacher. Receiving her teaching certificate from Greeley Teachers College now University of Northern Colorado, through correspondent courses. She first taught at a country school north of Alvin, then at the Wages School north of Eckley, CO.
She married Clifford L. Schmidt April 26, 1947 in Paoli, CO. To this union two children were born Jim and Lois. In 1955 the family moved to Washington state where they made their home in the Wenatchee River Valley until the fall of 2004 when they moved to Wray.
Dottie was always a lady on the go, needing to be doing something. Whether it was helping her mother with her seven siblings, being the bread winner for family after her husband was hurt, working in the local schools as a cook or as the Study Hall teacher, and becoming a beautician at the age of fifty and fixing hair for ladies until she was 85 years old. She loved to bake everything from wedding cakes to cookies. Dottie made and decorated hundreds of cakes including wedding, birthday and any other special occasion that came up. In 2001, she was named Citizen of the Year for the city and community of Cashmere, Washington. After returning to Wray, she became known as the “Cookie Lady” as she would bake 100 dozen cookies for vacation bible school every year, as well as for visitation and memorial services at the funeral home.
Dottie was very active in the Monitor United Methodist Church in Monitor, WA., serving as church secretary and treasurer for over thirty years. Dottie and Cliff loved to square dance and traveled all over the Pacific Northwest and British Columbia. Dottie sewed all their square dance clothing, making sure the couple always matched.
Dottie is preceded in death by her husband, Clifford of 58 years, parents, E.T. “Bud” and Lois Spellman, parents-in-law, Otto and Mable Schmidt, great-grandson, Jerry Schmidt, brother, Bob and wife, Patty Spellman, brother-in-law, Otto T. Schmidt and wife, Thelma, brother-in-law, Chuck Schmidt, brother-in-law, Bill Schmidt, brother-in-law, Cleo Brown, and sister-in-law, Sharon Spellman.
Dottie is survived by son, Jim Schmidt and wife, Brenda of Wray, CO, daughter, Lois Gonzalez of Wenatchee, WA, grandchildren, Jason and Jennie Schmidt of Wray, CO, Ryan and Amy Schmidt of Wray, CO, Erika and Michael Remus of Ft. Collins, CO, David and Angela Gonzalez of Rock Island, WA, and Mikey Gonzalez of Wenatchee, WA. Great grandchildren, Allen, Dillon, and Rosie Schmidt, Matthew and Sarah Schmidt, Nina, Malia, and Isaac Gonzalez, and Kai Studeman. Brother, George Spellman and wife, Lois of Kirk, CO, brother, Ralph Spellman and wife, LeAnn of Yuma, CO, sister, Jennie Brown of Yuma, CO, sister, Minnie Schmidt of Haxtun, CO, brother, Tom Spellman and wife, Margaret of Yuma, CO, sister, Peggy Spellman of Wray, CO, sister-in-law, Carol Schmidt of Holyoke, CO, and a host of nieces, nephews, and many friends.
Memorials can be sent to The Wray Community Vacation Bible School c/o The Wray United Methodist Church 501 Blake St. Wray, CO 80758.
Viewing was be held on Tuesday, March 23, 2021 at the Schmidt-Jones Funeral Home in Wray, Colorado from 8:00 a.m. – 5:00 p.m. A Funeral service was held on Wednesday, March 24, 2021, 10:00 a.m. at the Wray United Methodist Church in Wray, Colorado with Pastor Ben Wentworth officiating.
Schmidt-Jones Funeral Home is in charge of arrangements.