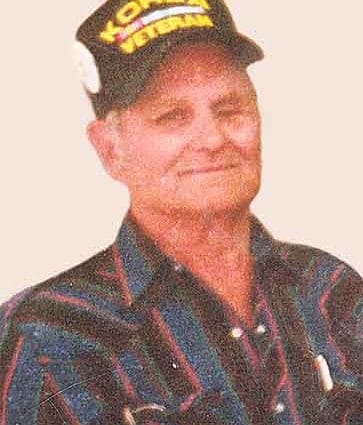 Eathon “Leon” Marr was born on August 17, 1930 to Mervin Marr and Junia Enid Mensendick in Franktown, Colorado. He passed away on January 14, 2020 in at the Yuma District Hospital in Yuma, Colorado at the age of 89.
Leon attended the Yuma schools and graduated with the class of 1949. On February 11, 1952 he enlisted in the US Army. He received his basic training at Ft. Leonardwood, Missouri. He was deployed to Korea where he received several medals, including the Korean Service Medal, United Nation Service Medal and the National Defense Service Medal. He was discharged from the service on February 4, 1954. Leon was active in the VFW and American Legion.
Leon was married twice for brief periods of time. In his first marriage a son, Russell Marr, was born.
Leon worked in the oil fields in Texas and Oklahoma where an accident on the job caused him to lose his left eye. After that he drove a truck and then he drove the Book Mobile Bus and ended his career with the Yuma County Roads Department driving a road maintainer and road equipment until he retired in 1992.
Leon was always ready and willing to help out his fellow man by doing jobs for them and helping wherever he could.
Leon was preceded in death by his parents, Mervin and Junia Marr, his grandparents and several cousins. He is survived by several cousins, relatives and friends.
The funeral service was held on Monday, January 20, 2020 at 10:30 a.m. at the Community of Christ Church in Yuma, Colorado with Mike Mueller officiating. Interment followed at the Yuma Cemetery. Baucke Funeral Home directed the service.