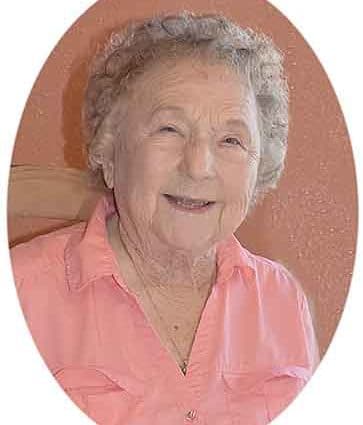 Evelyn “June” (Adams) Herron, 90, was born in Dodge City, Kansas on November 21, 1929 and passed away in Loveland, Colorado on July 15, 2020 as the result of an automobile accident. She was the oldest daughter of Ozene (Faulkner) Adams and Herbert Dean Adams. She attended Concord School in rural Ford County, Kansas through part of the 8th grade. While living in Kansas she said that she remembered terrible dirt storms and having to go to the cellar. She said she didn’t remember ever being afraid, it just seemed exciting. When June was 13, the family moved from Kansas to the Anton, Colorado area. Again, she remembered how the dust blew the day they moved to Colorado. Even that seemed exciting! She finished 8th grade at High Prairie School and graduated in 1947. On August 6, 1947 she married her high school sweetheart and neighbor, Newell Alfred Herron in Aurora, Colorado. Shortly after the wedding, they moved to the farm that would become their life-long home. To their union were born four sons and one daughter: Robert Leland, LeAnn Elaine, James Terrill, John Michael and William Patrick “Rick”. In 1967, the family moved into a new larger house that was transported from north of Akron to their farm. After her children were in school, she became postmistress of the Wiladel Post Office, one mile north of their farm, until the Post Office was closed in 1961. June and Newell were part of a close-knit community who helped each other during the summer months and frequently got together to play pinochle during the winter months. She was a member of the Nighthawk Club for around 70 years. She enjoyed hosting the club meetings in her home and trying new recipes and she loved to have club members read jokes that she had found, especially from the Flagler newspaper. She also loved to bowl with her friends and bowled in leagues in Akron, Yuma, Sterling, Brush and Fort Morgan for 50 years. At the time of her death she was planning to bowl in both Sterling and Fort Morgan. She was a delegate for the Akron City Association, Yuma Bowling Association and the Sterling Bowling Association and was a state officer for several years and traveled to the National League meetings around the country. She was an election judge for Washington County for over 40 years. June loved to be a member of the Bethel Union Church where she had many friends. June loved to travel, especially cruises. Her favorite cruise line was Princess and she was a platinum member. Highlights were the trips with the children and grandchildren to Disney World in 2000 and a Panama Cruise in celebration of June and Newell’s 65th wedding anniversary in 2012. Her last cruise was in December 2019-January 2020 with her family and friends to the Caribbean Islands for her 90th birthday. She traveled around the world including South America, Australia, Europe and Asia. When her children were young, the family would take a trip each year before school started. The family did a lot of trips to the mountains and camping. The most memorable vacation was to Yellowstone National Park. There were cars parked along the road where the bears were and signs everywhere not to feed the bears, but people were feeding them. She had a new movie camera so she jumped out to take pictures of a mama bear and her two cubs and in her haste, she left the car door open. Of course, the mama bear headed right for that open car door to get something to eat. Instead of jumping in the car, she kept taking pictures. On the film you can see slices of bread flying out of the car to get the bear out of the front seat. One of her greatest passions was genealogy. She would spend hours researching her family tree and loved to read the newspaper stories about her ancestors. She called it “digging up old relatives.” She collected news items, photographs and postcards connected to the family. She constructed a family tree of over 20,000 members. Another of her great passions was gardening. She was particularly proud of her iris collection. She loved to get varieties with many different colors and characteristics. After traveling to Hawaii, she became interested in growing hibiscus. She was a persistent gardener and tried many different plants. She was preceded in death by her parents and husband, her sons Robert and Rick Herron, grandsons, Jason Terrill, Derek James and Jeffrey Alan Brandon, her sister Joyce (Adams) Levens, her sister-in-law Dorothy “Lavonne” Meyers, brothers-in-law Allen Levens, Chester Smith and Lawrence “Bud” Meyers. June is survived by her children LeAnn (Herron) Brandon and her husband Russell and son Shawn, Jim Herron and wife Vicki (Gelster) and children Jessica and Matthew, John Herron and his wife Karen (Kliewer) and their children Luke and his daughter Charlotte, Adam, Ryan and wife Brenna and Rebekah (Herron) Biondo and her husband Cameron, brother Duane Adams and sister-in-law Thelma (Laybourn) Adams, sister Marjorie (Adams) Smith and many nieces, nephews and friends. She was a very loving and devoted wife, mother, grandmother and great-grandmother and will be dearly missed. Family was the light of her eyes. She loved to be called Grandma and more than once dubbed grandchildren into the family (Mike and Jason Kliewer and Bonnie O’Brien). She had an overflowing sense of compassion that often moved her to adopt not only people but also stray animals into her home. Her grandchildren remember Grandma’s laugh was like a laughing, gurgling brook that was so infectious you couldn’t help but join in, even if you had no idea what she was laughing at. She exuded sweetness and mirth everywhere she went.
A funeral service will be held Saturday, July 25, 2020 at 10:00 a.m. at Bethel Union Church. Interment will follow at the Akron Cemetery. Memorial contributions may be made to the Cope Community Rec Hall or a charity of your choice.