The first phase of the Ag Innovation Event Center is completed in time for the 2020 Yuma County Fair & Rodeos, which will be at the Yuma Count Fairgrounds beginning this weekend.
Unfortunately, not much of the general public is going to be able to see it utilized this year.

It will be used, however, though the new pens for hogs, sheep and goats will be limited as only sale animals and/or those in the Round Robin are being allowed to stay at the fairgrounds this year. The same goes for the beef entries.
“I think the flow is going to be a lot better,” said Dave Blach, one of several Yuma County residents that have spearheaded the vision and fundraising for the Ag Innovation Event Center at the fairgrounds.
The first phase involved expanding the beef barn/show ring building 100 feet to the east.
It includes more than 200 pens for hogs, sheep and goats at the east end, and moving the show ring to the center of the expanded open-sided structure. The home for the beef entries is west of the centralized show ring.
The expanded structure also includes new restrooms at the northeast corner, and new wash racks.
The pens for the smaller animals eliminates the need for the pen buildings located to the south. That location caused access issues when hogs or sheep, with their owners, were lined up to enter the show ring. Now they can go right down the alleyways to the show ring.
The buildings also include several big fans hanging from the rafters that will improve airflow and cool the building. 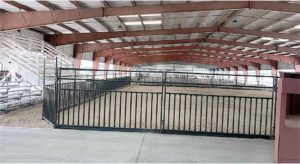 Blach said windscreen/sunscreens were being installed earlier this week, and electricians were finishing up final details.
“I think it’s going to be better for the animals and the people,” he said, adding the women’s restroom is greatly expanded from the old one.
The first phase — the expansion and the restrooms, cost more than $500,000. Local fund-raising events generated well above $100,000. There was a $350,000 grant from Great Colorado Outdoors (GOCO). DeKalb provided a grant. Smaller grants from Burlington Northern/Santa Fe Railroad and the Department of Local Affairs went toward the pens, and a feasibility study for the rest of the planned Ag Innovation Event Center.
Several locals also stepped up to donate to the purchase of the pens, which cost about another $100,000. Blach said those sponsors will be recognized on signs put up at the facility, adding the hope was the signs would be done in time for the fair.

This is just the first part of a much bigger facility that the Ag Innovation Event Center group envisions at the fairgrounds.
The second phase, the major project, calls for a center that will be a regional hub for agricultural research, and many other ag-related activities.
If the feasibility study shows such a facility can stand on its own — generating enough annual revenue to be self-sufficient — the group will move forward looking into potential financing for the ambitious plans.