The 2020 Yuma County Fair & Rodeos, which will have activities at the fairgrounds in Yuma Saturday through Wednesday, definitely is not going to be anywhere near normal during these days of the COVID-19 pandemic.

County leaders are keeping the fair mostly limited to participants and their immediate family. The number of people in the various “zones” at the fairgrounds will be capped at 175. Wearing a mask will be required when inside any fair building — though of course one can take it off to eat and drink in the Food Concessions Building. Masks also will be encouraged when outdoors, and social distancing is requested.
There will not be a night show concert, a carnival, nor a parade on Yuma’s Main St. The Junior Livestock Sale will be held Monday at 6:30 p.m. as usual, but fair organizers ask only buyers attend — and buyers also have the option of bidding via telephone.
Stormy Productions will be live-streaming the livestock shows and the sale on the Yuma County Fairgrounds Facebook page.
However, there are opportunities for the general public to attend the fair. There are three PRCA Rodeos planned, Tuesday afternoon and evening, and Wednesday evening. The Yuma Ministerial Association will have two concerts, featuring David Minton, in front of the grandstand on Sunday in order to spread out the crowd. Also, the exhibit all for Open Home Economics, General Projects, Gardening and Crops will be open to the public on Monday beginning at 1 p.m., and all day Tuesday.
Following are more details about various aspects of the Yuma County Fair & Rodeos.

The Zones
There can be 175 people at one time in the various “zones” at the fairgrounds. The show ring/livestock area is one “zone.” The grandstands are one “zone.” The arena infield is another “zone.” The arena infield is a smaller space that will have a limit of 125 people per event.
It will be rather simplistic to enforce the limits for ticketed events such as the rodeos, as there will be only 175 tickets for the grandstand, and 125 for the infield arena, sold for each of the three PRCA events. Yuma County Commissioner Trent Bushner said the Yuma Ministerial Association will have a clicker, and only 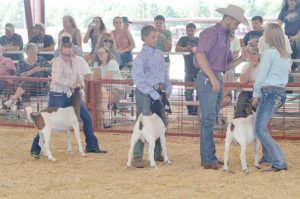 one entry and one exit, for the David Minton concerts, capping the grandstand seating at 175.
However, it will be more difficult for non-ticketed events, such as the livestock shows taking place in the show rink/livestock area. Bushner said there is going to be a lot of signage around the fairgrounds about the zone limits and other protocols, and it will be up to the public to follow the honor system.
Judges and volunteers, even in the outdoor areas, will be asked to wear masks. Fair Board Chairman Dave Blach also noted hand-cleaning stations strategically placed around the fairgrounds.
As for the cowboys and cowgirls participating in the PRCA Rodeos, they are going to be segregated from the crowd. Bushner said the county is working on having a food truck on site for the rodeo participants, as well as port-a-potties.

Livestock shows/Junior Livestock Sale
All animals — swine, dairy animals, sheep, goat and beef — will be weighed off the trailer. Exhibitors are asked to take their animals home at the end of the respective show, except for except for Round Robin and/or sale animals. It is asked only family members attend the animal judging.
The sale still will be held at the fairgrounds, still on Monday, beginning at 6:30 p.m.
It is asked that only buyers attend the sale, as well as the exhibitors’ family.
Also, there are options for those who prefer not to attend but still want to participate.
Letters have been sent out to previous buyers/bidders with a form to fill out if someone wants to add on to a certain youth’s market animal. All add-on payments must be received one week after the fair.
One also has the option to bid by phone. One can call Kristi Clark at (970) 397-6659 before Friday at 7 p.m. You will be contacted by phone before the exhibitor you designated enters the sale ring.
As mentioned above, the sale will be streamed live on the Yuma County Fairgrounds Facebook page.

Food booths
The Yuma County 4-H booth in the Food Concessions Building, Saturday through Tuesday. The food booth on the north side of the arena, operated by the Yuma Wrestling Club, also will be open at certain times.
People will be able to eat inside the building, but seating will be spaced and limited. There will be many more picnic tables located outside to help with the distancing.
Those who cannot or will not attend the fair, but still want their “fair burger” fix, can take advantage of curbside service available Monday from 12 noon to 8 p.m. under the tent by the fairgrounds along Hoag Ave.
The wrestling club’s food booth will be open Sunday 7 a.m. to 12 p.m., Monday 11 a.m. to 3 p.m., Tuesday 12 noon to 10 p.m., and Wednesday 7 to 11 p.m. Then again Thursday 7:30 a.m. to 10 a.m. during the WPRA Women’s Breakaway Slack, and 4:30 to 7:30 p.m. for the Steer Roping Jackpot.