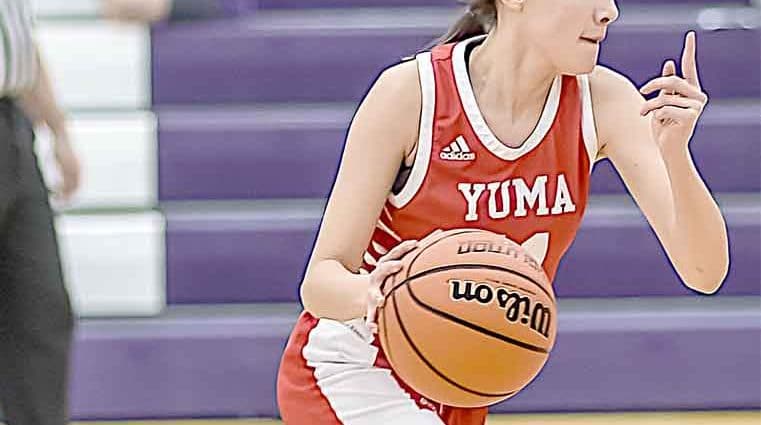 Girls had tough ending to season

Well, it has to happen some time, and unfortunately for this year’s Yuma High School girls basketball team, it was finally the one to see an eight-year run to the 2A state tournament come to an end.

The Indians were knocked out in the regional semifinals, last Friday in Rye, with a 47-32 loss to Dawson School.

It might not have mattered anyway as fifth-seed, and undefeated Rye, rolled past Dawson 52-26 the next day in the regional final after blowing out Center the previous day. (Rye features plenty of young players and might be the next dominant hoops program in 2A.)
The Indians finished with a 10-12 record, the program’s first losing record since 2011, when this year’s seniors were in third grade.
Yuma opened the season with three straight losses, but then never won or lost more than two in a row, as the Indians never could quite get over the hump. However, there were only two seniors in this year’s varsity lineup, Reagan Nolin and Lainey Mekelburg, and there is plenty of young talent coming up to give hope that the good times will return soon.
Yuma headed to Rye for regional after placing second to Holyoke in the District 2 Tournament the previous week.
However, the Indians ran into an 18-4 Dawson School that lived up to its record.
Dawson ran out to a 25-12 lead in the first half.
Head coach Bob Rahm’s Indians were not going to go out without a fight, though, as they battled back to within six points in the second half. Dawson, however, quickly pushed it out to 10, and the Indians eventually lost 47-32.
Dawson got the job done by making 10 of at the charity stripe during the fourth quarter. Dawson was 12 of 16 overall, while Yuma made six of 10.
Ema Richardson led the Indians with 20 points, while Lea Richardson had five, Elle Roth four, Meidi Reyes two and Reagan Nolin one.