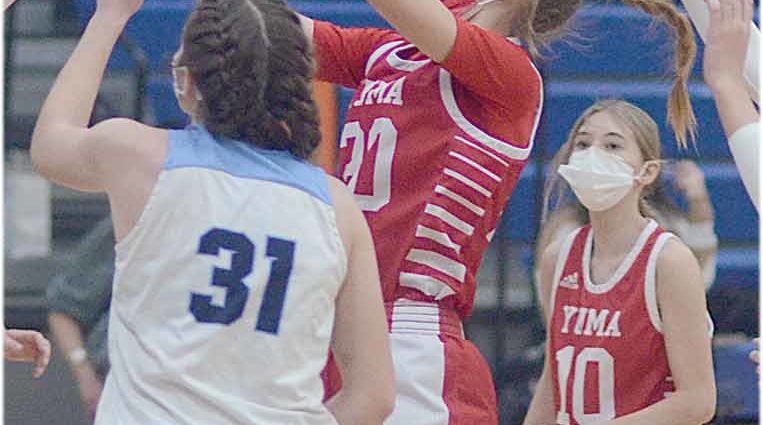 This week is road trip time for the Yuma High School girls basketball team.
The Indians went 4-10 in the shortened 2021 Season B, but still made the 24-team Class 2A playoff field thanks to a terrific strength of schedule.

In fact, head coach Jeremy Robinson jokingly noted that the Indians didn’t just “squeak-in” as the 24th seed, actually ending up 23rd. (They ended up being the 22nd seed as Mancos had to bow out of the playoffs due to quarantine.)
“I’m excited for the girls,” Robinson said. “Honestly, I think we got a pretty decent draw.”

That they did, though it will require them staying in the mountains for a few days.
As the 22nd seed, the Indians opened the playoffs this past Tuesday at 11th seed Soroco, located in Oak Creek, which is 295 miles from Yuma, pulling off a thrilling 46-44 win.
That victory sends them to sixth-seed Paonia for a Sweet 16 game today, March 11. (6 p.m. tipoff.) Paonia is 366 miles from Yuma
Because of the long distances, the Indians left for Oak Creek on Tuesday morning, and spent the night in Kremmling, which they were going to do win or lose Tuesday. They have since made their way south for today’s game at Paonia.
If they somehow win that, they would most likely play at third-seed Sanford (located near Alamosa) in the quarterfinals on Saturday, requiring a lengthier stay on the western side of the state. (CHSAA announced today, March 11, that Saturday’s games have been moved to Monday due to the pending snow storm.)
“I just hope they’re excited,” Robinson said of his players about Tuesday’s playoff opener. “That’s a long way to go to lose a game.”
Luckily, they went all that way to win.
The Indians led 29-25 at halftime, and opened up a 35-25 lead in the third. However, they had one of their patented cold spells as the Rams rallied to take a 42-39 lead with 3 minutes, 10 seconds left.
Taylor Law tied the score with a 3-pointer her second of the game. Lea Richardson, who had 10 points in the second quarter, put Yuma up 44-42 with two free throws, but Soroco came back to tie.
Senior Ema Richardson then stepped up with a putback of a missed shot with about 5 seconds left for the winning points.
The Richardson girls both scored in double figures, and Law added six points. Complete stats were not available prior to press time.
Yuma closed out the regular season last weekend with blowout losses to Wray and Platte Valley.
However, even losing to such quality teams helped the Indians’ overall ranking as it bolstered their strength of schedule.
Robinson said the Indians ended up with a plus-8.7 strength of schedule, the highest in all of 2A.
The Soroco Rams went 10-2 in the regular season, including a lot of blowout wins, but their strength of schedule was a negative-1.3. “Apparently strength of schedule is extremely important,” Robinson noted.
“The teams we’re going to play probably wouldn’t have the records they have if they had played our schedule,” Robinson said. “We’ve been battle tested.”
Yuma has played five of the top 13 teams in the 2A playoffs, two of the top eight in the 3A playoffs (Brush and Platte Valley), and also played two teams that are in the 1A playoffs — meaning nine of their 14 games were against teams that made the postseason. Plus, they have a win against a Peyton team that did squeak into the playoffs as the 24th seed, and also played a really good Chase County squad in Imperial, Nebraska..
“Maybe this is the bright shining moment that we need,” Robinson said.
Wray ended up with the eighth seed after concluding the regular season with a blowout win over the Indians. However, the Eagles are hosting ninth-seed Sedgwick County tonight, as the Cougars beat Peyton 50-39 on Tuesday. The winner of tonight’s game then likely will travel to top-seed Holyoke on Saturday. Holyoke plays 16th-seed Lotus School of Excellence tonight in the Sweet 16 round.
Don’t count out the Eagles on making a run, as they looked very impressive in their 76-47 win last Friday night in The Pit.
Yuma quickly fell behind 11-2 to its county rival, but like they normally do, they began battling back, getting to within two, 15-13, before Wray pushed its lead back to 23-13 early in the second quarter.
However, the Indians then put together a terrific 12-1 run to take a 25-24 lead midway through the quarter.
Wray, though, reasserted itself to lead 40-31 at halftime.
The Eagles then locked down the big win with a 22-0 run in the third for a 30-point lead, and making the fourth quarter a formality.
“You have to play 32 minutes against a team like that,” Robinson said.
Yuma stats were not available.
The Indians turned around the next day and headed to Kersey for an early-afternoon game against the Platte Valley Broncos, which are the third seed in the 3A field.
Once again, the Indians battled, trailing just 10-8 after the first quarter. However, once again they could not keep up offensively as Platte Valley gradually built on its lead. It was 20-14 when the Broncos closed the second on a 9-0 run.
Yuma allowed only five points by the Broncos in the third, but could manage only six itself. Platte Valley then pushed the lead to 20 in the fourth, eventually handing the Indians a 52-30 loss to end the regular season.
“They made eight 3s and we made zero,” Robinson said. “I wasn’t disappointed with how we played, but it’s easy to get behind when the other team can shoot like that.”
Yuma stats were not available
The loss seemingly put an end to the Indians’ shortened Season B.
However, by Monday morning when all of the “metrics” used to determine the playoff field were finalized, it turned out the Indians had at least one more game.
“And here we are, the season’s not over,” Robinson said Monday.
And now it is lasting at least through tonight’s Sweet 16 round.