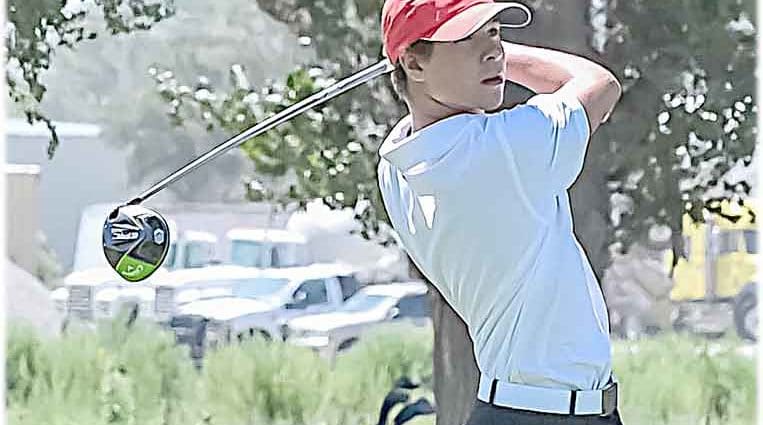 The Yuma High School boys golf team had to grind through a busy stretch last week against some good competition.

It paid off as the Indians returned action earlier this week and claimed the team title at the Burlington Invitational. Next up is Cheyenne Wells on Friday, followed by the Frontier Academy Invitational in Greeley on Wednesday.
Yuma coach Benjamin Weathers took a varsity foursome to the Sun Devil Invitational at Saddlerock Golf Course in Aurora, last Wednesday, hosted by Kent Denver.
Weathers said Saddlerock is the toughest course the Indians will play all season.
Senior Bryson Castillo led the way for Yuma with a 90, which Weathers said is

the best individual round a Yuma golfer has had in the five years attending the tournament. Sophomore Jack Blecha shot a 98, junior Brekyn Josh a 104, and sophomore Nash Richardson a 105.
Weathers said Yuma’s 292 team total is the best the Indians have ever had Saddlerock, beating the previous low team score by 19 strokes. Still, it was a very difficult field as the Indians still finished 17th out of 18 schools.
The same four were up early the next day for an 8 a.m. start at the Eaton Invitational, held at the Eaton Country Club.
Josh led the Indians this time with a 91, with Castillo right behind him with a 92. Richardson and Blecha both shot a 102, for a 285 team score. It was another tough tournament, as the Indians finished 23rd out of 25 teams.
They were back at it Friday when YHS hosted 12 other schools for the Yuma Invitational at Indian Hills Golf Course.
Yuma’s varsity shot a 269 team score to finish fourth in the 13-school field. Brush took the team title with a 252, led by top medalist Braxton Shelton shooting a 77,
Richardson was top for the Yuma crew on the home course, shooting a career-low 85. Blecha followed with a 90, while Castillo shot a 94, and Josh a 96.
Four other Yuma golfers also got to play for the first time Friday. Junior Clay Robinson and sophomore Ethan Goeglein both shot a 103. Junior Lars Sims shot a 113, and sophomore Jayden Serl shot a 128.
Yuma was able to take a varsity and JV to Prairie Pines Golf Course in Burlington this past Tuesday. Blecha shot a career-best 84 for third place, Castillo an 86 for fourth, and Richardson a 93. That gave the Indians the team title with 263. The JV shot a 288, with Robinson shooting a career-best 90, Goeglein his best score with a 97, John Smith a 101, and Jake Hagemeier 119.