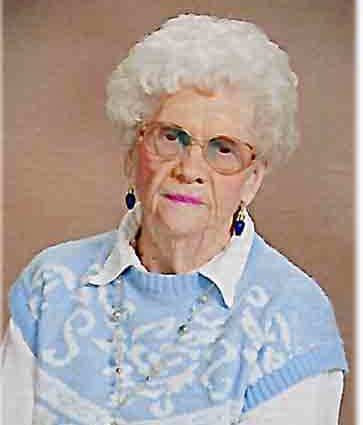 Ina Mae Delinger, 87, died Tuesday, August 4, 2020 at St. Catherine Hospital in Garden City, Kansas. She was born August 29, 1932 in Stratton, Nebraska the daughter of Bert William & Elsie Eveline (Bramblett) Stuck.
Ina Mae attended schools and graduated from High School in Yuma, Colorado. On June 18, 1950, she married Foster Delinger in Yuma, Colorado. From 1955 to 1968, they lived in Sterling, Colorado and Kimball, Nebraska. They later moved to Dighton, Kansas in 1968, and in 1970 moved to Garden City, Kansas where they have lived since. Ina Mae worked in food service for USD #457 from 1976 to 1995.
She was a member of the First United Methodist Church in Garden City, and having a love for children, she has helped in the church nursery since 1975. She was also a member of the Builders Sunday School Class, United Methodist Women, and AARP. She enjoyed her church activities, fellowship meals at the church, visiting with people, word search puzzles, watching TV, going out to eat, getting her hair done, and especially enjoyed taking care of children.
Survivors include two daughters Elaine Childers and Beverly Delinger both of Garden City; five grandchildren; and fifteen great-grandchildren; and many nieces, nephews, and cousins. Ina Mae is preceded in death by her husband Foster who died on October 10, 1999. She is also preceded in death by her parents; a son Edwin Delinger; a daughter Sharon Bourquin; a brother Everett Stuck; and a son-in-law Stuart Childers.
A Celebration of Ina Mae’s life will be held at 2:00 p.m. on Saturday, August 15, 2020 at the First United Methodist Church in Garden City with Rev. Joel Plisek officiating. Burial will follow at Valley View Cemetery in Garden City. Friends may call from Noon to 8:00 p.m. on Friday and from 9:00 a.m. to 11:00 a.m. on Saturday all at Garnand Funeral Home in Garden City. The family request memorials given to the First United Methodist Church in care of the funeral home. Condolences may be given at garnandfuneralhomes.com.
Arrangements by: Garnand Funeral Home, 412 N. 7th St., Garden City, Kansas 67846.