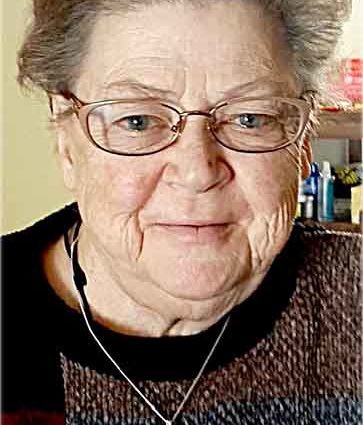 Joyce Janelle Slinger was born in Charles City, Iowa on October 29, 1938 to Harold G. Slinger and Carrie Melbinger Slinger. Joyce was the 4th of 6 children in the Slinger family. She often talked about being towards the end of warm water when bathing in the family tub placed on a cold kitchen floor and having to wait her turn at the outhouse. Joyce was baptized July 1, 1939 into the St. John Evangelical Lutheran Church in Charles City, Iowa. She had a strong never wavering Lutheran Faith that she pronounced even in her final days.
Joyce grew up in Charles City, Iowa and graduated from Charles City High School. In March 1957 she married Larry Dean Jones, to this union one child was born, Kathy Joe. In 1959 Larry and Joyce divorced, and she met a handsome young man named Theodore (Ted) Wittlake while he was attending line-o-type school in Charles City. Ted immediately fell in love with Joyce and her daughter Kathy. In January 1960 Joyce and Kathy boarded a train in Charles City and headed to Eckley, Colorado where she would marry the love of her life and lifelong partner, Ted on February 18, 1960. To this union 2 daughters were born, Tracy Lynn in 1961 and Gay Shannon in 1963. In 1963 Ted adopted and renamed Kathy Jo as his own. Ted always said Joyce and Kathy came as a package deal so every wedding anniversary Ted would send Joyce 11 roses and Kathy would get the 12th rose.
Ted and Joyce moved to Yuma in 1967 when they purchased the Yuma Hotel, Joyce ran the Hotel while Ted continued to operate the line-o-type machine across the street at the Yuma Pioneer. 4 years later they sold the Yuma Hotel and purchased a liquor store they named Ted’s Liquor. After selling Ted’s Liquor Ted and Joyce purchased the Montgomery Ward Store. When catalog sales started to dwindle, they sold the business then managed the J& B Bar, then KC Sticks, and The American Legion (Vet’s Club) until they purchased Log Cabin Liquor with their daughter Gay which was her last adventure until retirement.
For 40 plus years Joyce was an avid follower and Ted’s biggest fan to all the baseball and softball teams he coached. Being a small, short woman Joyce inherited the name “Twig” somewhere along the line and to this day several people still called her Twig.
Joyce loved volunteering for things, during her active days she was involved in several ladies’ groups and volunteered for many activities at the Church. She also loved to sing and dance at every opportunity given. Kathy, Tracy, and Gay have fun memories of the dance contests they had in Iowa between Joyce and her Sisters vs the Daughters and Nieces. Truth be known Joyce was the best dancer by far.
Joyce had 4 grandchildren, Chris (Buck), Kandy, Kurt, and Kendall. She was her grandchildren’s best fan never missing a sporting event the boys were in and treasured her only Granddaughter Kandy as she never missed an opportunity to show off Kandy’s beautiful artwork.
Joyce spent the last years of her life at Yuma Care, still a little spit fire, she never lost her spunk and the eye roll she had perfected, joking around with the staff at every opportunity she had. She especially enjoyed it when Kurt’s dog, Tulo got to come visit her.
Joyce is preceded in death by her parents, Harold and Carrie Slinger; Sister Lois Heddens (Ralph) and husband Ted Wittlake. She is survived by her Sisters, Patricia McCauley (Gene), Marilyn Kolb (Harlan), Bothers, Jack Slinger (Zelle) and Terry Slinger (Sandra), Daughter Kathy and Husband Toby Murphy, Daughter Tracy Wittlake, Daughter Gay and husband Duane Criswell. Grandchildren Chris Jones and wife Kristel, Kandy Galles and husband Jason, Kurt Criswell, Kendall Murphy and wife Sharayah. Great-grandchildren, McKenzie, Madelyn, Cameron, Tanner, Mason, and Avery along with several nieces and nephews.
Private Family Service at St. John’s Lutheran Church with burial at the Eckley Cemetery was held on July 2, 2020.