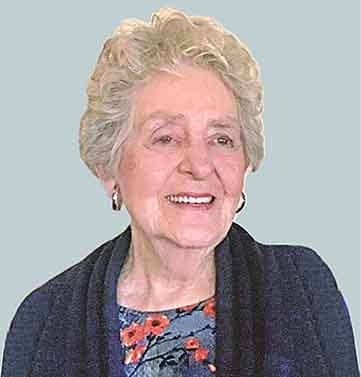 Laurel Fennie passed away peacefully at home on November 21, 2020 under home hospice care. She died of heart and lung disease.
Laurel Leigh Fennie was born on December 6, 1934 in Kirk, Colorado; she was the daughter of Paul and Irene Morris. She graduated from Yuma High School in 1952. Laurel was an accomplished pianist and organist. She began lessons when she was 6 and began playing for church when she was 11 years old.
Disciplined and committed to music, Laurel practiced many hours a day. Paul, her father, would drive Laurel to Denver twice a month to take piano lessons. She played the organ and piano for church,
countless weddings, funerals and plays.
Laurel, a music major, graduated from Colorado Women’s College in 1954 and then went onto the University of Nebraska. While at Nebraska, her school spirit shined. Belonging to the Tassles, the girls spirit club, they decorated every home game with the card section.
As a music major she was the accompanist for Joe Feeney, the legendary tenor from the Lawrence Welk Show, the Lincoln Men’s Chorus and the University Singers. The Christmas concerts gave her
the opportunity to accompany the choirs with her favorite piece, The Hallelujah Chorus by Handel. Laurel enjoyed playing music of her favorite composers, Bach and Chopin. Music Composition was her absolute favorite class because she could “hear all the parts.” Laurel graduated from the University of Nebraska in 1956….GO BIG RED!
Laurel and Kent Fennie were married in 1957 and were blessed with two children, Keli and Kristopher. In 1965, Laurel began her 32 year teaching career with Yuma Public Schools. She taught music and art
for 19 years, traveling to Red Willow and Eckley. Ready for a new challenge, Laurel pursued her Master’s Degree as a Media Specialist and graduated from the University of Northern Colorado in 1988.
She served as the Yuma School District Librarian for 13 years where she automated all the libraries in the school.
Laurel loved accompanying in musicals. Indeed, her strength and skill was in accompaniment, able to improvise in a moment when a singer inadvertently switched lines. She was a fixture in the orchestra of the Yuma Areans productions, playing in The Unsinkable Molly Brown, The Sound of Music, Annie, and many other musicals.
An avid golfer, she began playing when the Yuma Golf Course first opened and continued to swing that club until last year, at the age of 84. Laurel volunteered at the Yuma Community Cupboard, including
serving on the board; she derived great pleasure from this work, especially the boutique. Laurel also served on the Yuma Public Library Board for many years. A lifelong member of the Yuma United Methodist Church, Laurel loved her church family. She enjoyed traveling, gardening, and quilting. Laurel was a dedicated fan of the Nebraska Cornhuskers, Denver Broncos, and Yuma Indians. Her
beloved Cornhuskers were playing when she passed. It is unclear if she passed in order to avoid seeing them lose the game.
In 2018, Laurel embarked on searching for her biological parents. With persistence and help from friends, she was able to discover her birth family. Two of her siblings were still alive, and the families
connected. There was a family reunion in 2019 in Idaho, where over 30 family members met. She and her brother Byron were the honored guests in the town parade and won the first place trophy
for their float, Lost and Found Reunion.
Laurel had a rich life, surrounded by family and friends who loved her. She was kind, fun, and gifted. She was preceded in death by her parents Paul and Irene Morris, sister Sharon Spellman and birth sister Micki Kilker. Laurel is survived by her two children Keli An and Kelly Frates, Kristopher Fennie and Anthony DePalma, two grandchildren Kaci Frates and Kip Frates, her birth brother and wife Byron and Myra Lewis, special friend Debi Pearson and a host of family and friends.
Due to the COVID-19 epidemic, a celebration of life is planned for a later date when the epidemic subsides. In lieu of flowers, gifts may be made to the Hospice of the Plains or the Yuma Public Library.