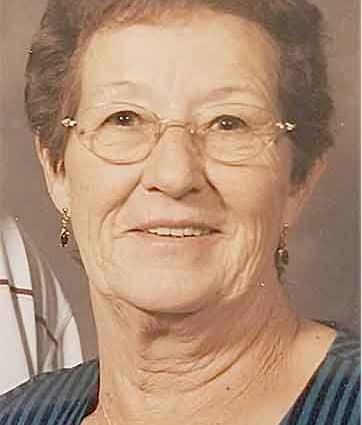 Marcelyn Rose (Brandon) Patterson was born on April 19, 1936 to Clifford Brandon and Veda Dodge Brandon. On November 27th, Marcelyn was called home by her Lord and Savior; she passed away following a brief battle with COVID and other underlying conditions. Marcelyn was in the comfort of her home surrounded by loved ones at the time of her death.
Marcelyn was the 7th of 12 children. She was born at the Ardiene Foutz home place, and was delivered by Mrs. Ezra Alishouse. Marcelyn lived there until the age of two when her father moved the family to Onalaska, Washington, moving back to Fort Morgan, Colorado in 1947, and then onto the farm south of Akron. She graduated from High Prairie in May of 1954. On June 27, 1954, she married the love of her life John Patterson, and to this union they added three children: Jerry Carl, Lonny J, and Lana Sue. Marcelyn loved spending time bowling, golfing, playing bridge, cheering the Otis Bulldogs, and spoiling the grandkids and great-grandkids. Marcelyn and John were partners in life as well as in business over the years, with their last business venture starting in 1971 with their company C. John Patterson and Sons, Truss and Buildings. Years later, the business name was changed to Sito Building Components where Marcelyn worked until retiring at the age of 80.
Marcelyn was preceded in death by her parents Clifford and Veda Brandon, in-laws Merle and Mary Patterson, daughter-in-law Bette Patterson, her brothers and their wives: Wayne Brandon (Betty), John Brandon, Burnell Brandon, and Carroll Brandon (Koleta), her sisters and their husbands: Veda Resler (lvis), Velma Graves (Harold), and brother-in-law Dean Draegert.
Marcelyn is survived by husband John Patterson, sons Jerry Patterson (Cheryl) and Lonny Patterson (Sandy), and daughter Lana Spurling (David); grandsons Collin (Michelle), Dillon (Trent), and John (Derek); granddaughters Shae Smith (Dan), Alisha Thorn (Devin), Jamie Weber (Jerry), Kandi Spurling, Brooke Price (Ryan), Sara Botkin (Jon), Amy Grantham (Nick), and Haley Perry (Andrew); and several great grandchildren. Marcelyn is also survived by sister Phyllis Draegert, brothers, Earl Brandon, Jim Brandon (Vickie), Russell Brandon (LeAnn), Marvin Brandon (Carolyn); sister-in-laws Alvina Brandon, Christina Brandon and Leta Brandon; and many nieces and nephews
A funeral service was held Thursday, December 3, 2020 at 10:30 a.m. at the First Presbyterian Church of Otis. The service will also be live streamed on Facebook at www.facebook.com/otispres. Interment will follow at the Otis Cemetery. Memorial donations may be made to the Hospice of the Plains or to the Otis Cemetery Board.