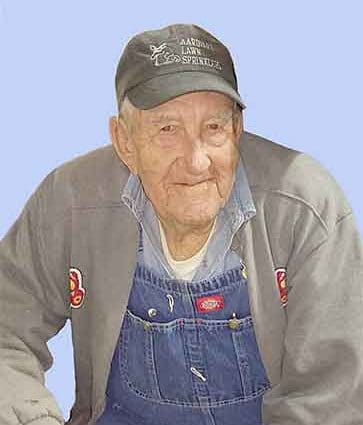 LaVern Alfred Hansen was born on March 20, 1925 in Otis, Colorado to Alfred and Jennie (Aydelott) Hansen. He passed away on April 28, 2020, at the age of 95, at the Washington County Nursing Home in Akron, Colorado.
LaVern attended School through the twelfth grade at the Lone Star School.  He married  Delores “Jean” (Curtis) Hansen on April 30, 1956 in Wray, Colorado. LaVern and Jean spent over sixty years together before Jean’s passing on September 3, 2017.
LaVern was a self-employed farmer and had his own backhoe service. He purchased his first backhoe in the early 60’s and ran his own service for fifty years. After retirement he worked for his son, Fred, and he helped him with his custom harvesting business and worked for several local farmers to occupy his time. After Jean passed away Fred would take him with him so he could sit and watch while Fred worked on sprinklers, he hated the fact he was unable to work like he was used to in his earlier days.
LaVern always made sure he took his family to all three county fairs every year and would make a trip to Denver to take his kids and usually several other kids to Lake Side and Elitch’s Amusement Parks and later to the Casa Bonita Restaurant. He also made sure they took in the free ice cream cones the Otis Fire Department passed out on the Fourth of July fireworks every year as long as they weren’t in the harvest field.
Alfred was preceded in death by his wife, Jean Hansen; parents, Alfred and Jennie Hansen; in-laws, Henry and Emma Curtis; siblings, Jerry, Bob, Verna Mae and several in-laws and other relatives.
Alfred will be remembered as a hardworking kind and loving man he will be missed by his son, Rick Hansen and wife, Julie of Cope, Colorado; grandson, Mason Hansen and wife, Kelly; Caleb and Lucas of Akron, Colorado; granddaughter, Carmen of Denver, Colorado and Shiloh; daughter, Sue Ehrman and husband, Eric of Platner, Colorado; granddaughter, Chelsey Hansen of LaSalle, Colorado; grandsons, Eklin Ehrman of Platner, Colorado and Elliott Ehrman of LaSalle, Colorado; daughter, Annie Reed and husband Jeff of Mooreland, Oklahoma and grandchildren, Brendyn of California, Desiree of North Carolina; Jake of Colorado Springs, Colorado; Sheree and Samuel both of Oklahoma. Son, Fred Hansen and wife, Amy of Yuma, Colorado; grandchildren, Quentin and son Ayden of Loveland, Colorado; Amber and Danny and Sophie of California; Marina Hansen of California; Taylor Hansen of Yuma, Colorado along with several in-laws, nieces, nephews, other relatives and friends.
Due to the Coronavirus there was a graveside service at the Yuma Cemetery in Yuma, Colorado with Mike and Sue Mueller officiating. The service was streamed on Facebook Baucke Funeral Home and Monuments.