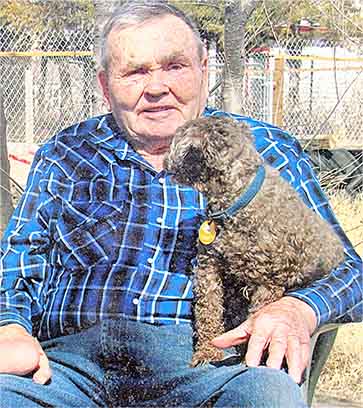 Morris Marion McDonald was born March 7, 1930, at Haxtun, Colorado to Marion and Bertha McDonald. He was the oldest of three children -Mardell and Marvin.
They lived on the homestead at Eckley and farmed until 1958 and moved a mile away and lived there until Morris retired. Morris worked on the homestead farm with his brother and parents and invested in buying his own land close to the farm. They had a dairy for approximately 25 years. Morris graduated high school in Vernon, Colorado.
He got his right hand in a corn picker when he was 20 years old and lost four fingers. Due to this incident he became known to the children as “bumper man” because he would bump them on top of their heads. On September 2, 1978 Morris and Nola Gerst were united in marriage and lived on the family farm. To this union Morris became a stepfather to 4 children – Mike, Shar, Jeff and Ben. Morris harvested cattle feed, corn and alfalfa along with raising cattle. He did mechanical work on the farming equipment. He would always lend a helping hand to anyone in need. Morris enjoyed going to the cattle auctions and at times bought other animals he just could not resist. Nola and Morris were divorced in 2005 but remained close.
Lonnie Morrison (nephew) and Morris were very close and worked hand in hand on the farm during the summers and after Lonnie graduated he moved to the farm. Morris retired and moved to Yuma, Colorado, and frequently went to the farm.
When Morris retired he spent his time enjoying gardening, raising chickens, visiting with family and friends. He enjoyed taking Brownie (his dog) on the gogo cart around town and sitting in the yard with Brownie. When Lonnie was unable to take care of the farm and Morris Brent White (great nephew) worked on the farm and took Morris, Mardell and Brownie to the farm frequently until Morris was unable to go. Morris moved to Harmony House and lived there for his remaining days. He passed away on April 26, 2021.
Morris always had a sense of humor and enjoyed playing pranks on people. He enjoyed visitig and reminiscing with family and friends. He will be missed by many.
Survivors:
Mardell White sister of Yuma, Colorado. Marie McDonald sister-in-law of Eckley, Colorado.
Step Children Shar Bottjer of Fredricksburg, Texas. Ben Gerst of Colorado, Mike Gerst of Moses Lake Washington.
Step Grandchildren
Jackie Saunders of Fredericksburg, Texas. Nodel Saunders of Fredericksburg, Texas. RoyLea Saunders and family of Collinsville, Oaklahoma. Stevie Saunders of Texas. Nate Gerst of Washington and Seth Gerst of Washington.
Nieces and Nephews
Cheryl Rogers and husband Wayne Aker of Eckley, Colorado. Rolinda Meek and Kirk Cullumber of Emporia, Kansas. Roy White and wife Beth from Douglas, Wyoming. Tammy McDonald and Paulette Yauk of Greeley, Colorado. Randy McDonald of Eckley, Colorado. Dalene Ferguson of Nebraska.
Great grandchildren, many great and great/great nieces and nephews, cousins, and friends.
Proceeded in death by:
Bertha and Marian McDonald parents. Marvin McDonald brother. Nola McDonald ex-wife.
Jeff Gerst stepson. Lonnie Morrison nephew. Trinda Faye McDonald niece. Doug Rogers nephew. Walter Rogers brother-in-law. LeRoy White brother-in-law. Christopher White/Meek great nephew, Robert White/Meek great nephew. Baby Browers great/great nephew. Jake Browers great/great nephew.