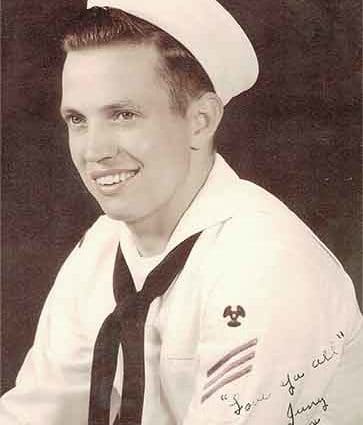 Yuma, Colorado
Passed 12-16-20 @ Home peacefully of natural causes
Age: 81
Born: 12-31-1938 in Eckley, Colorado
Father: Otto Newton
Mother: Bonnie Jean Armagost Newton
Wife: Louise Ann Smee Newton
Married 11-28-1964, Passed 7-13-2016
Survived by his sister Roberta (Newton) Schaffer and brother Gary Newton, son Jeff Newton
Otto “Juny” Newton lived in Eckley on the family farm. Graduated Eckley High School 1956, Then enlisting in the Navy in 1957 with Gary Wakefield & Joe Rice 1957. David & Dale Wakefield previously joined and visited Otto, Gary & Joe Often. Otto was honorably discharged from Active Duty, June 1962 as Machinist Mate MM2 E-5. Otto remained in San Diego after discharge. His 1st job was at Sharp Hospital as Boiler Mechanic where he met Louise Ann Smee and fell in love. They married November 28, 1964 in Louise’s hometown, Boulder City Nevada. Their only child Jeff was born at Sharp Hospital in 1971. Otto Started his own HVAC company in 1970 and retired in 2013. Jeff continues the HVAC tradition. Otto enjoyed golf and coming back home to Eckley to visit and always missed the farm. Otto visited with David & Dale Wakefield many times over the years and were lifelong friends.
Otto enjoyed collecting/restoring antique telephones, clocks and cash registers. Jeff remembers many antique shows on his dad’s shoulders.
Otto always enjoyed fast cars. Friends called him “hotrod”. His favorite was Chevy El Camino’s and had 4 at one time. He still retained his first, as original owner 1967 El Camino. David Wakefield added that while in the Navy in San Diego, Otto often wanted to race Dale & David’s cars with his. After losing to David & Dale, Otto sold his car and bought a faster car
Memory From Gary Newton:
Around 1955 Otto had driven Gary into town at night on an errand of sorts. On the way home, Gary had fallen asleep, woken to being tossed through the windshield as Otto had fallen asleep at the wheel. Gary has cuts on his face and broken his nose. Otto walked a ¼ mile to a neighbor’s house to get help. Later Gary went to the hospital and was ok.
While kids, Otto & Gary milked cows early in the morning which Ott Sr. sold to dairies. Otto often shared these stories with Jeff growing up when Jeff wanted to sleep in.
Memories from Roberta “Sis” (Newton) Schaffer:
Juny and I were in Spanish class together at Eckley High School. One test day Juny said to the class don’t sit near me as I know the answers to the test and how to spell them correctly. He placed empty chairs around him so no one could sit close to him.  And try to cheat.
While Juny was in the Navy on a ship they would play Baseball and Juny was the catcher and a batter hit him in the head and he was unconscious for two days.
Gary and I had piano lessons on Saturday mornings in Wray.  I did the driving and onetime I lost control of the car and we drove into the ditch. Juny came the rescue pulled us out of the ditch. I operated the gas pedal and Juny got us back onto the Highway. Gary and I were able to get the piano lesson.
Otto remained in San Diego until August 2017 when he moved to Yuma with Jeff, Sarah and Grandkids Kylee, Hannah & Wyatt.
Otto was very happy to spend his final years in Yuma County. He enjoyed his time with family and friends. Otto enjoyed helping Gary to paint a historic wagon, just like the wagon they grew up with. They were able to have the wagon in Old Settlers parade recently. Otto enjoyed having his 1967 El Camino in every Yuma and Old Settlers parade since returning home.
Otto is now repairing boilers and chillers for the “Big Guy”, enjoying the links and relaxing with his only love Louise. He is finally not disabled.
Memorial will be December 31st, 12:30PM @ Eckley Community Center. 201 Catchpole St. Eckley CO 80727. The event will be catered, so please just bring yourself! Lunch will be followed by Honor Guard Ceremony @ 2PM.
This day is special not only that it’s Otto’s Birthday, but at the location where he graduated High School.