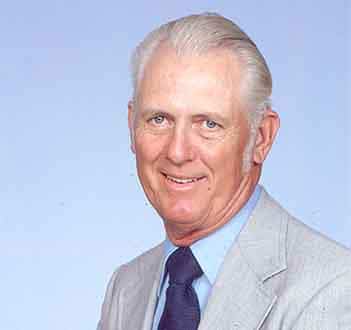 Thomas William Weathers was born on a homestead near Epsie, Montana on August 13th, 1923 to Chester and Dena Weathers. He was the 3 of 8 siblings. He spent the first 14 years of his life on farms in Montana and Colorado with a short stay in Florida before his family eventually settled in Boulder, CO.
Tom attended Boulder High School where he played basketball and football. He also met Virginia Manring there, and they both graduated in 1942. Throughout their entire lives they were faithful attenders of their high school reunions, even becoming involved in the reunion committee for many years. Tom and Virginia were married November 14th, 1942 in Denver, where they both worked.
Tom enlisted in the Army Air Corps and was called to Active-Duty June 13th, 1943. Virginia moved to San Diego, CA to be with her mother, where Tom II was born. She returned to Denver where Tom was stationed temporarily and stayed in Denver while Tom was in service overseas in England. After 19 months in England, Tom returned to Denver and was honorably discharged as a Corporal in the US Army Air Corps.
He worked as a carpenter and construction foreman while attending University of Denver School of Architecture and Building Construction Management. in 1946, son John was born. Tom graduated with a Bachelor of Science Degree in Business Administration in 1952.
While still in college, Tom formed a construction business and was licensed in Denver. Virginia also worked in the business, answering phone calls and doing much of the book work. Byron was born in 1953 and Diana in 1955.
In 1956, Tom applied for a position as Construction Analyst with Veteran’s Administration Loan Guarantee Housing Section. He found much satisfaction in his work with housing design for veterans, especially paraplegic veterans. After 2 years with the VA, Tom went back to private industry as a Construction Superintendent. Gordon was born in 1957.
Federal Housing Administration had requested Tom’s abilities when he was employed by the VA, so he decided to accept and held the position of Architectural Examiner until his retirement in 1978. During his tenure, he had the responsibility of accepting plans, maintaining compliance with design criteria and construction details for housing for elderly, nursing homes, low income and multi-family housing standards.
In 1966, after much searching throughout Colorado, Tom and Virginia discovered Yuma County and all it had to offer in the way of development for farming, especially irrigation. Tom and Virginia purchased a farm 8 miles east and 2 miles north of Yuma in December 1966. The land they purchased was near Dale and Betty Kirchenschlager, beginning a lifelong friendship between the two families.
Tom and Virginia began attending the First Presbyterian Church in Yuma where he was a Deacon and attended regularly until his health no longer permitted. He could find no record of his baptism as a child, so Tom was baptized at the Presbyterian Church in 1982 surrounded by most of his family.
In early 1967, Tom asked his brother Don if he would join in a partnership. Additional land was purchased 5 miles east of Yuma in 1969.
Tom and Virginia commuted with their family on weekends and days off for 12 years to work on the farm. In 1976 the partnership was dissolved, and a new home was quickly constructed by Tom and family. Many called their small home, a “little house on the prairie”. Tom and Virginia moved to their Yuma home permanently in 1978. The plan was for the original house to become a garage, and in 1991 the plan became a reality. The home addition was completed, and the entire family gathered for Tom and Virginia’s 50th anniversary there in 1992.
IN April 2003, Virginia passed after a short battle with cancer. Tom’s loving care for his wife during this time had an impact on many around them.
After Virginia’s passing, Tom carried on her lifelong tradition of regular correspondence. Birthday and anniversary cards continued to be mailed until Tom’s early 90’s.
Tom desired his independence, and he was able to continue to live in his home for 5 years longer with the help of at-home care. Rene and Javier Garcia of Wray became more than caregivers, they became part of the family. They were daily seen eating lunch in town at various restaurants. Tom would often jokingly refer to Rene as either “his shadow” or “his hired man”. By keeping Tom active in the community, Rene and Javier helped Tom maintain a high quality of life which he and the entire family appreciated. Their friendship remained even after Tom moved to Yuma Life Care, including an “unscheduled” birthday trip across the street for lunch.
Tom went to be with the Lord at 12:20pm on 12/20/2020 surrounded by his children, both in-person and by phone. He is survived by his sister Geraldine Hatanaka of Denver, sister-in-law Billie Weathers of Kansas City, his 5 children and their spouses, 16 grandchildren, 30 great-grandchildren and one great-great-grandchild.
The family-narrated video of the obituary may be viewed here.