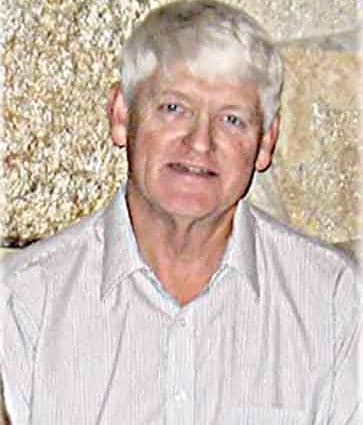 Robert Fred Crossland passed away January 5, 2021, at the Washington County Nursing Home in Akron, Colorado.
Robert “Bob” was born January 20, 1946, in Haxtun, Colorado, the son of Robert Wayne and Edna (Johnson) Crossland. Bob attended his early years of school in Fleming, Haxtun, and Eckley, Colorado, and graduated from Wray High School in 1964. After high school he went on to graduate from the National Electronics Institute in Denver, Colorado, in 1965. It was while in Denver that he met and courted his life-mate, Sandra Kay Stamm. Sandy and Bob were married September 9, 1967, and then moved to Long Beach, California, where Bob was stationed on the U.S.S. Fechtler, a Navy destroyer.
In February of 1970, after Bob completed his service in the Navy and Sandy had graduated from nursing school, they returned to Denver, Colorado. Bob worked temporarily painting cars with his brother-in-law, Gene Dominguez, before he was employed with the Aurora Fire Department. His two daughters, Tara Lee and Amanda Jean were born during their time in Denver.
Bob soon tired of the city and working for someone else and convinced Sandy to move back to the farm. In 1972 they purchased their first piece of farm ground nine miles northeast of Wray, Colorado. For the next two and a half years they were commuter farmers. As a fireman Bob routinely had two to four days off in a row. On his days off he would travel to Wray to farm. Sandy would accompany him if her days off coincided. Finally, in the Spring of 1975, after they had built a home, they moved to the farm permanently.
He raised a variety of crops including corn, wheat and hay in the early years but eventually focused on raising primarily wheat, as well as hay for his small cattle herd. He converted an old general store building on the property into a chicken coop for his hens and pullets. In the 1990’s, Sandy decided to return to nursing school and Bob took this opportunity to sell the original farm ground and reinvest it in pasture, thus turning it into a ranching operation.
Though always busy with farming and ranching, his family always came first. It was common for him to pause in the middle of a work task to help anyone, especially his girls or his family. He enjoyed taking time to teach his daughters important life skills like how to drive, how to change a tire, and how to file their taxes. He also had a passion for nature. He never mowed the edges of the driveway preferring to enjoy the beauty of the wildflowers that grew there. He fostered in his daughters a respect for all life as he involved them in the raising of baby chicks, baby calves and the occasional orphaned baby cotton tail.
Bob seemed to find contentment in whatever he was doing. He always enjoyed a good conversation and a well-timed joke. Whether we were fixing fence, working cows or cleaning corrals, he knew how to make it fun. He always seemed to be smiling whether he was picking up his daughters from school or once they were grown, helping them move for the umpteenth time. He rarely missed an opportunity to support or spend time with his girls.
While Bob obviously enjoyed being a husband and a father, nothing compared to the joy he experienced with his grandchildren. Jake and Pa, as Bob became affectionately known, were fast friends and shared a special connection from the start. They shared a love for tractors, trucks and going to work. Anna was the apple of his eye and he would marvel at how she was always on the go. She loved to play at the park, and he would follow her around until they were both “plumb tuckered out.”
In 2017, Bob finally retired and sold the remainder of his cow herd. In the fall of 2017, after the death of his wife, Sandy, he moved to the Beehive Assisted Living Center in Sterling. He was pleased to find that he already knew a few of the residents. He looked for ways to make himself useful, taking out the trash or helping to carry in the weekly groceries. He would often declare that he was the “favorite” among the staff. In 2020, he moved to the Washington County Nursing Home in Akron where he quickly made friends with many of the staff members.
Preceded in death by his parents, Robert and Edna Crossland, and wife, Sandy, he leaves to mourn his passing, daughter Tara with husband Casey Garton and their children, Jake and Anna, daughter Amanda Crossland, sister Mary Ann Dominguez, brother Kenton Wayne Crossland, and many other cherished family members and friends.
Services were held at Wray United Methodist Church Friday, January 15, 2021. Memorials may be made to Robert F. Crossland Memorial Fund c/o First Pioneer National Bank in Wray, CO. Schmidt-Jones Funeral Home was in charge of arrangements.