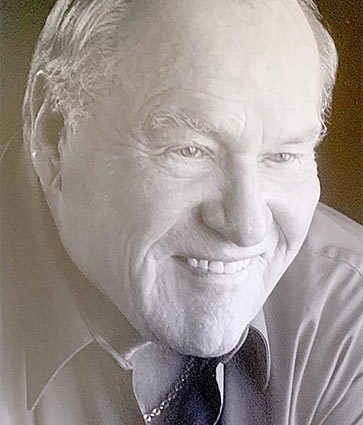 Ronald Thomas, 82, unexpectedly passed away on November 25, 2020 at his home in Las Vegas Nevada. He was born on his grandparent’s front porch on October 7, 1938 in Wray, Colorado to Floyd and Norma Toner Thomas.
Ron grew up in Eckley, Colorado. He graduated from Eckley High School, and after high school he joined and served a full stint in the Navy. Following his service, he returned to Colorado where he met Shirley Blach from Yuma. They were married for 45 years. Ron (known by his Colorado friends as “Big Guy”) and Shirley raised their family in Greeley, Colorado. Ron was the founder and owner of Thomas Electric Company, utilizing his skills learned from the Navy. He loved to fish, traveling the west coast from Oregon to Alaska on fishing expeditions. He enjoyed riding motorcycles, and traveling with Shirley in their RV. If you needed to find Ron & Shirley on a Friday night, you needed to look no further than the Rear of the Steer, a local watering hole. He was a longtime member of the Loveland Elk’s club and known for his generous and giving nature within the Loveland community.
He was preceded in death by Shirley. He is survived by his son Rick Thomas and his wife Tracey, daughter Pam Gekas and her husband Greg, and daughter Stacy Thomas. He also leaves four granddaughters: Amy Gekas and husband Guillermo Loza, Haleigh Gekas, Kelly Conway and husband Aaron, Janelle Thomas Carestia and her husband Nick. They and his five great-grandchildren will all miss him greatly.
Ron’s extended family includes his brother Bob Thomas, his wife Karen of Greeley Co. and their children and grandchildren
Ron met Kay Brownwood in 2008, had an instant connection, and were inseparable until his passing. They moved to Windsor, Colorado shortly after meeting. In the past 12 years, Ron and Kay moved frequently; they recently relocated to Las Vegas, NV, where Ron passed away suddenly with Kay at his side. Ron and Kay loved to travel; they traveled in their RV, cruised to multiple locales around the world, and piloted their own boat crabbing and exploring the Puget Sound. He is survived by Kay and her family, who feel truly fortunate to have known him these past 12 years.
A celebration of life will take place May 22, 2021, at 11:00 a.m. at 1012 Madison Avenue in Loveland, Colorado.