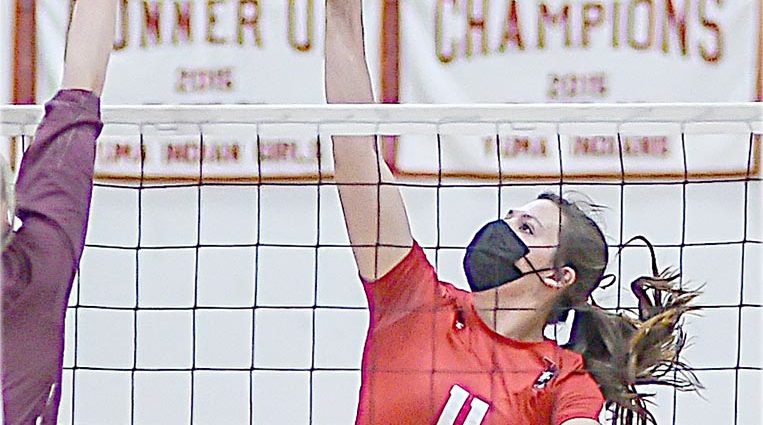 Season getting short for Yuma volleyball

It is looking like the shortened Season C definitely will be short for the Yuma High School volleyball team.
The Indians, 4-8 overall, are sitting at No. 35 in the Class 2A Rating Percentage Index (as of this past Monday afternoon) heading into its final two matches of the regular season.

They host Brush today, April 22, then travel to Limon on Friday to wrap up the COVID-impacted Season C.
Yuma not making the 24-team postseason might not be completely lost yet. There is recent precedence — the YHS girls basketball team had a similar record at the end of its 14-game Season B, lost its last two games in the regular season, but somehow ended up 22nd in the final ratings, pulling off two upsets before losing in the state quarterfinals.
However, the odds seem even more stacked against the volleyball Tribe, even if they do win their final two matches. The Indians are further away from the Top 24, and their final two opponents not do much to improve their RPI, even if Yuma wins both matches.
Brush entered this week 3-8 overall, and 46th in the Class 3A RPI. Limon, 5-6 entering this week, is the only team with a losing record in the top 24 of the 2A RPI, sitting at No. 14, thanks to an Opponents Winning Percentage of 0.740, the highest among all 2A teams.

Yuma is second in the OWP category at 0.608.
The Lower Platte Activities Association’s Wiggins and Sedgwick County are first and second in the 2A RPI, and Holyoke is No. 17. Among the LPAA’s 1A schools, Merino is No. 7.
Could that OWP help push the Indians into the 24-team regional field, like it did for the girls basketball team?
“As we learned from basketball, it’s possible we could sneak in, but I feel the chances of that are slim,” coach Jenny Noble said. “We’d have to win both games for sure to have any shot. We are about 35th in all of the polls now, so we’ll just have to see.”
As for the LPAA regular season title, Merino, Wiggins and Sedgwick County all finished with 7-1 records. Holyoke, Yuma and Wray also are done with LPAA play, finishing with 5-3, 3-5, and 1-7 marks, respectively. Akron, Haxtun (both 2-5) and Caliche (0-6) all showed having LPAA matches left this week.
Noble said she was not sure how the three-way tie at the top would be handled to determine a league champion.
The Indians wrapped up its LPAA schedule last Friday when it hosted Merino and Akron for a triangular, losing to the former and beating the latter.
Yuma first faced off against the Rams from Merino, losing in four sets, 27-25, 19-25, 10-25, 16-25.
The Indians took the early lead against Merino in the first set, only to see the Rams battle back for the lead. However, Yuma kept competing and eventually pulled out an exciting two-point win.
The Indians could not keep it going though, struggling to match the hitting prowess of Merino’s Taysa Conger, a 6-foot junior that dominated at the net with numerous booming kills. (Her final stats for the match were not posted by Merino.)
Nevertheless, Yuma scored seven straight to take a 13-12 lead in the second set. The Indians then quickly fell behind 14-18 and never could recover.
They scored the first three points in the third set, but Merino went on a 10-0 run, and the Indians never got closer than five points the rest of the way. Yuma fell behind 3-9 in the fourth set, battled a bit to 8-13, but Merino scored the next four points and cruised from there.
“After the first set win against Merino, I was definitely hoping we could extend that momentum going forward,” Noble said. “Set two wasn’t bad, but we had eight earned points and 15 unforced errors. Set three was two earned points and 12 unforced errors, and set four was five earned points and 15 unforced errors. You don’t win sets or matches with those types of numbers. It’s difficult to comprehend, especially after we had some pretty good moments in set one. We just don’t have any staying power.”
Elle Roth had 14 kills for the Indians, Ema Richardson seven, Caddis Robinson five, Mia Dischner four, and Meidi Reyes two. Lea Richardson recorded 28 setting assists. Roth and Taylor Law had 18 and 10 digs, respectively. Dischner was 17-17 serving with one ace, Roth 12-13 with one ace, Robinson 11-12, E. Richardson 11-11 with one ace, L. Richardson 8-9 with one ace, Reyes 5-5 with one ace, and Lyndsey Mekelburg 3-3.
Merino dispatched Akron in the next match, then the Rams of Akron faced off against the Indians.
Yuma had some tense moments, but pulled out the win in four sets, 25-20, 20-25, 25-16 and 25-22.
The first set was close all the way, but buoyed by a rowdy student section enjoying being back in The Pit on Level Green, the Indians scored four of the last five points, closing out the win on Robinson’s kill.

Yuma fell behind 2-6 in the second set, battled back to take leads fo 13-11 and 17-14. Akron, though, scored the next five points, forcing a Yuma timeout. The Indians got to within 20-21, but the Rams scored the last four points for the win.
The Indians ran out to leads of 8-1, 10-2 and 15-5 in the third set, but went on one of their patented cold spells as the WashCo girls pulled to within one, 15-14. Yuma, though, regained control, and a Roth serving ace made it 21-16. The set ended on a great dig by Jayci Mekelburg that fell in on Akron’s side of the net for the 25-16 win.
It appeared the match might go to a fifth set as the Indians fell behind 2-8 in the fourth set. However, the Indians turned the tables with nine straight points, featuring some big hits by Robinson with L. Richardson serving. This bunch never makes it easy, though, falling behind 14-17, only to rally again for a 19-17 lead, with Dischner’s serving finally closing out the set, and match, win by three points.
“The Akron match was a battle, but we put together some pretty decent rallies, and we had a great crowd that helped us out, as well,” Noble said. “Again, too many unforced errors made it difficult to dominate the entire match, but hey, it was a much needed win.”
Robinson, a freshman, had her best match of the season, finishing with 14 kills from the outside, while E. Richardson had 10 and Roth eight, along with four from Dischner, three by L richardson and two from J. Mekelburg. L. Richardson had 28 assists. Yuma served at a 93.6-percent clip with 15 aces. Roth was 24-24 with four aces, L. Richardson 20-20 with three aces, Dischner 18-23 with four aces, Robinson 13-13 with three aces, Reyes 7-8 with one ace, and E. Richardson 6-7. Roth had 34 digs, Robinson 19 and L. Richardson 18. J. Mekelburg and Robinson led in serve receive.