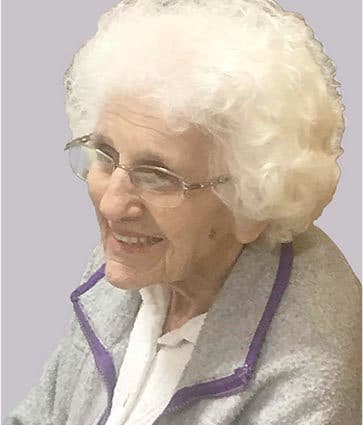 Ruby (Fadenrecht) Heinrichs was born on May 13, 1924 at the corner of Road K and Road 8 near Joes, Colorado to Ben Fadenrecht and Susie (Koop) Fadenrecht. Ruby was the last of five children. Her siblings were brothers, Edger and Edwin and sisters, Matilda and Alice.
Ruby was a busy body. She loved to work outside driving the tractor for her dad and working with the cattle and horses. She came to know her Lord and Savior at an early age.
She met the love of her life, Dave Heinrichs, in her early years. They were married on November 18, 1945 at the Mennonite Brethren Church in Joes, Colorado. To this union were born two children, Virginia in 1946 and Bobby in 1958. They were married for fifty-five years.
Ruby kept busy cleaning homes and the motel in Joes along with her sister, Matilda. Then she found her passion working in the restaurants in Joes and Cope as a waitress. The last restaurant was the Maranatha in Joes, owned by Herman Juarez.
Ruby and Dave loved to go town when she was not working. After Dave passed away on December 16, 2000 she continued to work as a waitress at the Maranatha for Herman.
Her sister, Matilda and husband, Albert Warkentine, started taking Ruby to town with them after Dave passed away. She loved going to town and getting bargains at the Thrift store and she loved her sweets, so they always had to stop somewhere to get donuts. She was able to stay active until she was forced to give up her independence and go to the Hillcrest Nursing Home in Wray in July of 2020.
Ruby was a spitfire until she had to give up the fight on April 12th, 2021 at the Hillcrest Care Center in Wray, Colorado.
Ruby is preceded in death by her husband, Dave Heinrichs; parents, Ben and Susie Fadenrecht; mother and father in-law, Jacob and Marie Heinrichs; great granddaughter, baby Jesse and Ruby’s sisters and brothers and their spouses.
Ruby is survived by her daughter, Virginia (Marion) Carter of Kirk, Colorado and son, Bobby (Gloria) Heinrichs of Joes, Colorado; Granddaughters, Susan (Garvin) Hill of Joes, Colorado; Rhonda (Danny) Thomas of Lockney, Texas; Monica (Rick) Stramel of Goodland, Kansas; Delette (Justin) Crisp of Flagler, Colorado and McKeesha Moberly of St. Francis, Kansas; ten great grandchildren, eight great-great grandchildren with two more expected soon along with many other relatives and friends.
The funeral service was held Saturday, April 17, 2021, 10:30 a.m. at the Liberty Baptist Church in Joes, Colorado. Interment followed at the New Hope Mennonite Cemetery also in Joes. Baucke Funeral Home directed the service.