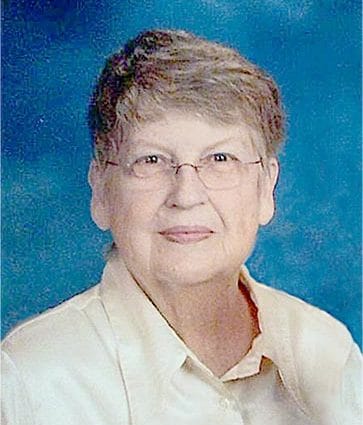 Wilma Irene (Keene) Myers died on Wednesday, March 17, 2021 at the age of 78 in Wesley Medical Center, Wichita, KS. Wilma was born January 28, 1943 in Bentonville, AR to William L. “Bill” and Esther L. Keene.
After living in Pea Ridge, AR for numerous years, the family moved to Ulysses, KS where Wilma attended Ulysses High School. She was a member of the class of 1960 and a graduate of Regis University.
Wilma married Harvey Myers in August of 1958. They were blessed to have two children, Lisa Gail and Jeffrey Alan. Wilma was employed by USD #214 as the head cook at Ulysses High School for many years while Harvey made a living working for DeKalb Seed Company.
After the children were grown, Wilma and Harvey became owners of Myers Seed Cleaning located in Yuma, CO. They traveled with their mobile business throughout Colorado and Kansas cleaning seed wheat for various farmers including those in Stanton and Grant counties.
Upon retirement, the couple moved to Wamego, KS to be nearer their son Jeff. They remained there for many years until a recent move to Valley Center, KS allowed them to be near their granddaughter, Donna Kitson and her daughter Kahlan.
Wilma is survived by her husband, Harvey, one daughter Lisa Myers (TJ Simons) of Katy, TX, four granddaughters, Donna Kitson, Wichita, KS, Kimberley (Jacob) Henson, of Rancho Cordova, CA, Sarah (Collin) Smith of Kansas City, MO, and Lindsey Myers of Palmer Lake, CO, one grandson, Joshua (Jacqueline) Myers of Des Moines, IA, and four great grandchildren. She is also survived by three sisters, Lorine (Robert “Bob”) Myers of Lindsborg, KS, Judy (Dawn) Gaff of Caney, KS, and Sharon (Joe, II) Budion of Sylvania, OH; seven nieces, three nephews and numerous great and great, great nieces and nephews.
Wilma was preceded in death by her son, her parents, and a brother, Lesley Eugene Keene.
Wilma was very loved by her family, who will dearly miss her. She was especially fond of loving on the little ones as she told them stories of her youth and their ancestors, keeping ancestral memories alive. Wilma was a Christian woman who loved to spend her free time crocheting, quilting, reading books or exploring numerous other creative outlets.
Wilma was cremated and wished to have her ashes spread amongst the grandeur of the Fall aspen foliage in the Estes Park, CO area. The family is planning a Celebration of Life in the future and would welcome anyone wishing to share their experiences or memories of Wilma at that time. The date and time of the event will be announced at a future date.