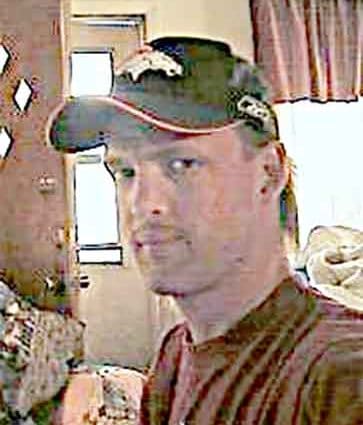 Shannon Brent Edwards was born on February 7, 1974 in Yuma, Colorado to Laverne Dee Edwards and Pamela Kay Edwards.
Shannon entered into his eternal life April 16, 2020 in Sterling, Colorado very suddenly.
Shortly after Shannon was born he was diagnosed with HED (Hypohidrotic Ectodermal Dysplasia) as well as Pyloric Stenosis. He had to have surgery to correct symptomatic changes that came due to the pyloric stenosis.
Although, Shannon’s physical health issues were quite serious and affected his well being severely most days, he tried very hard to carry on with his life as normally as possible. During his child and adulthood he had many times where it became quite difficult to obtain normalcy, due to his illnesses.
During the summer months while Shannon was just a child you would find that he spent the majority of his days spent at the Yuma Swimming Pool. And time spent around the house you’d find him playing with neighborhood children. When the heat became to much for his little body to bare, he would come indoors and run in and take a cool bath and then immediately run into the living room to crawl up into his favorite recliner that was directly in front of the air conditioner enjoying the cool and watching his favorite cartoons.
Shannon was the youngest of 3 children born to Laverne and Pamela, Mitchell the oldest, Jana the middle child, and Shannon the youngest child.
Shannon was raised in Yuma Colorado and would attend Yuma schools. He was brought up in the Assembly of God church. Attended regularly and would attend youth group often. He was baptized in the Assembly of God church.
In February of 1979 tragedy would strike our family. Our father passed away of a massive heart attack while at work. This truly was a devastating event for the whole family.
In 1980 our mother Pamela would fall in love with a long time family friend and would marry Robert O. Rogers in October that year. Our stepfather and Shannon became quite close immediately, as Shannon truly needed the father figure. They enjoyed boy scouting events, as well as fishing, camping, and Shannon enjoyed going to the dairy where Bob had worked. While at the dairy Shannon knew that he could take breaks and go into the breakroom, where he would find an abundance of handmade beef jerky. To Shannons delight he surely would partake. It usually took him awhile to eat it because he had very few teeth of his own and hated wearing his dentures.
Shannon excelled academically and became bored with school, as it came way to easy for him.  He was also bullied quite profusely by many children throughout his childhood. So with that being said, he would not graduate with his senior class in 1992. He dropped out and began studying for his GED, he then graduated with honors from NJC GED program in Sterling, Colorado.
From a very young age Shannon was very inquisitive about how things worked. He would take things apart and slowly put them back together, just so he could see the logistics of how they worked.
In Shannon’s younger years he talked our mom into letting him enroll into computer classes, he then would learn to program, code, as well as how to build computers. Even these courses became a breeze for Shannon and he excelled with them. Technology was truly one of Shannon’s favorite passions in life. Shannon would continue working in technology throughout most of his life and up until he passed, he had his own business “Edwards Enterprises” where he would do anything from trouble shooting software issues, hardware issues, programming, and building computers for people. He was a genius when it came to computers and thoroughly enjoyed every moment of it. At the time of Shannon’s passing he had been enrolled in online school just a few months earlier, for more schooling in Computers.
Shannon’s true passions, and loves in life were that of “Family”, his dog Chewbacca, Computer Technology, Star Trek, and Star Wars. He loved collecting star trek ships and concert shirts as he loved attending concerts. He also loved going to Comic Con. “Live long, and Prosper was one of Shannon’s life mottos.
Shannon put his heart out several times to gain a wife to settle down and raise a family, but time and time again, he would have his heart broken. Unfortunately, Shannon never found a woman worthy of acquiring and stealing his heart that was so full of love to be shared.
Shannon was an enormously, kind, loving, sensitive, genuine, generous, talented, humorous, and highly intelligent man. Those of us left here to mourn his passing will miss him greatly, and life will surely not be the same without him.
Shannon was preceded in death by his father Laverne in 1979, and his mother Pamela in 2010, paternal and maternal grandparents, many aunts, and many uncles, a few cousins, a couple good friends, and his beloved Chewbacca.
Shannon leaves to mourn his passing, his stepfather Robert Rogers of Yuma, CO., his older brother Mitchell Edwards of Sterling, CO., his older sister Jana Edwards-Brinkerhoff and husband Robert of Sterling, CO., nephews Kalen McDonald and wife Sherry of Yuma, CO., Swithen McDonald and wife Diamond of Sidney, Neb., PFC. Tarren McDonald and fiance Staci Higgins of NC, nieces Ashleigh Leach and husband Guy of Lexington, KY., Alicia Bettes and husband Eric of Kansas, Brittany Edwards of Plant City, Florida., great nieces Myka and Tehya McDonald of Yuma, CO., Celeste of Panama City, Florida, Brooklyn of Lexington, KY., Madisen of Kansas, great nephews Mattix of Panama City, Fl., and Connor.
Many Aunts, Uncles, Cousins, and a host of other family and many friends.