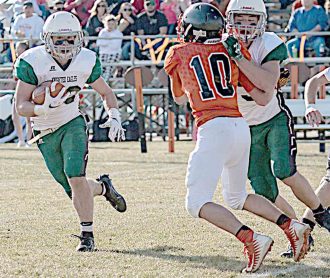 The preseason Top 10 polls for every classification were released on CHSAANow.com, Monday.
One area team, Stratton/Liberty, is top-ranked in 6-man.
The Yuma Indians were not ranked in Class 1A, though the Indians did receive votes.
Several North Central Conference teams made the 1A Top 10, led by two-time defending state champion Limon ranked No. 1. The Indians open their season at Limon on Monday, October 12. Other NCC teams in the Top 10 are Holyoke, which the Indians do not play in the shortened six-game season, at No. 5, Wray at No. 9 and Highland at No. 10. Burlington and Wiggins joined Yuma in the “Others Receiving Votes” category.
Five-time defending champion Sedgwick County is the preseason No. 1 in the 8-man poll. Dayspring Christian, No. 3, and Merino, No. 6, are the only other teams in that league ranked in the Top 10.
Other regional teams joining Stratton/Liberty in the 6-man Top 10 includes Fleming at No. 2, Prairie at No. 3, Hi-Plains at No. 8, and Briggsdale at No. 9.