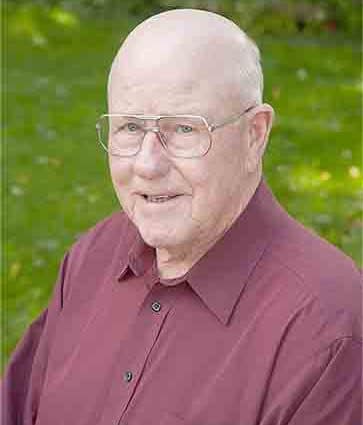 After a long start to the year 2020, Harold “Red” Lee Blazer went to be with the Lord at the age of 86 on Friday, September 25, 2020. He passed peacefully in his home surrounded by family.
Red was born in Vernon, Colorado on December 20, 1933. He was the third of five children born to Howard “Slim” and Ada Blazer. He spent the majority of his life in the Vernon and Wray area. He succeeded in obtaining an 8th grade education, and the rest of his knowledge came from the school of hard knocks. On December 15, 1952, with his close friend Larry Dean Yost, they enlisted in the United States Navy. There they traveled to several tropical paradises, and spent most of their time aboard U.S. Kenneth Whiting. On December 5, 1956, Red was honorably discharged from the U.S. Navy.
Upon returning from the Navy, Red moved back to Wray, Colorado where he met and married Bonnie Whomble. They were married on his 25th birthday, and went on to have a marriage that spanned 61 years. To this union they had a son, Jerry in 1961, and a daughter, Stacy in 1964. Red had chosen to support his family by working at the Yuma County Road and Bridge Department for 27 years. Seventeen of those years were spent as the Yuma County Road Supervisor. Some of his notable accomplishments were managing the road conditions during the Blizzard of ’77, reconstruction of the Davis and Beecher Island Bridges, and the modernization of the Yuma County Road and Bridge equipment. He finally retired in 1989. After his retirement Red and Bonnie moved to Washington D.C. where Bonnie continued to work for the Department of Agriculture, and Red found a job at BEST department store as the “fix-it” guy. In 1991, they officially retired to Wray to their original home of 60 years on Sunset Lane.
To anyone who knew Red, they knew he was a tool man. He thrived on building and designing various projects. He spent most of his time in his shops in the backyard. He would lose sleep at night trying to figure out how he was going to fix something, or what he was going to build next. His favorite saying was “gotta have a system”, because nothing ever worked, without the proper system. His specialty was metal and welding, and absolutely loved to work on all types of machinery. He had been known to fix quite a few golf carts around town, do handy projects for the Lutheran Church, and many projects that improved his children and grandchildren’s “systems”.
Red was also a devout friend and family man. He enjoyed supper club with the same group of friends for 40+ years. You could find him with this group always on Friday night at the El Patio, and later the Sandhiller. He was also his children and grandchildren’s number one supporter. If there was an event within an hour radius, he was there; typically an hour or so earlier than the time of the event, and always in the very best seats. To all those who loved him, he always had a word of advice and a laugh with a knee slap.
Red is preceded in death by his parents, his two sisters: Viola (Blazer) Wall, and Arlene (Blazer) McCracken, and one younger brother: Robert “Bob” Blazer. He is survived by his wife Bonnie, of 61 years, his brother Dewayne Blazer, his son, Jerry Blazer (Tammi), his daughter, Stacy Brophy (Don), and his seven grandchildren, Jenna (Blazer) Worman (Benton), Annsley (Brophy) Ferrari (Jonathan), Madison Brophy, Jon Blazer, Jake Blazer, Paul Brophy, and Blaze Brophy, and one great-grandchild, Jesse Blazer.
Memorial service was held Saturday, October 3, 2020 at the Calvary Lutheran Church with Pastor Timothy Davis officiating. Inurnment was in the Grandview Cemetery following services with military honors. Memorials may be made to the Calvary Lutheran Church, 518 Dexter Street, Wray, Colorado 80758.
Schmidt-Jones Funeral Home was in charge of arrangements.