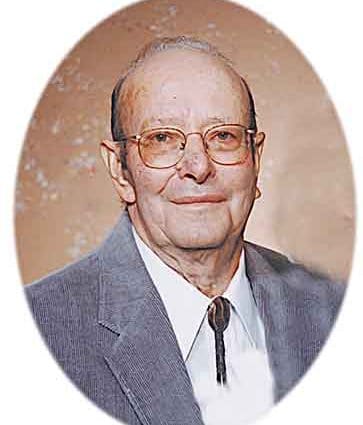 Vern Otfred Churchill was born on August 17, 1925 to Okal and Birdine Churchill.
He passed away on February 9, 2020 at the Washington County Nursing Home in Akron. He was 94 years old.
Vern was married to Mildred Wyona “Toots” Rogers on September 27, 1942. To this union, two children were born, Jimmie Clayton and Emma May.
Vern was well known as, and proud to be a bus driver for the Otis School district. He started as a substitute driver in 1963, becoming full time in 1964 and retired in 2003. He enjoyed his job, especially transporting kids to numerous sporting events and field trips.
He was also involved in farming and ranching and spoiling the dogs and cats. He was known to be a bit on the ornery side, always had a story to tell, and a joke to follow. He always said if he wasn’t giving you a hard time that he didn’t like you. He touched many lives and will be greatly missed.
Vern is preceded in death by his wife Toots Churchill, his father Okal Churchill, mis mother Birdine Churchill, sister Darlene Marr, sister and brother-in-law Dorothy and Charles Kuntz, son Jim Churchill, great-grandson Jeremy Neuschwanger and an infant great-granddaughter.
Left to cherish his memories is his daughter—Emma Prescott and husband Selmer; daughter-in-law Josie Churchill; brother-in-law Harold Marr; grandchildren Steven Prescott and wife James, Shane Prescott, Peggy Prescott, Karen Neuschwanger and husband Mike, Tony Churchill and Amanda, Greg Churchill and wife Marsha, Bryon Churchill and Wendi; and adopted family member Mike Nash. There are also several great and great-great grandchildren, nieces and nephews and other relatives and friends.
A memorial service was held Saturday, February 15, 2020 at the First Presbyterian Church of Otis.