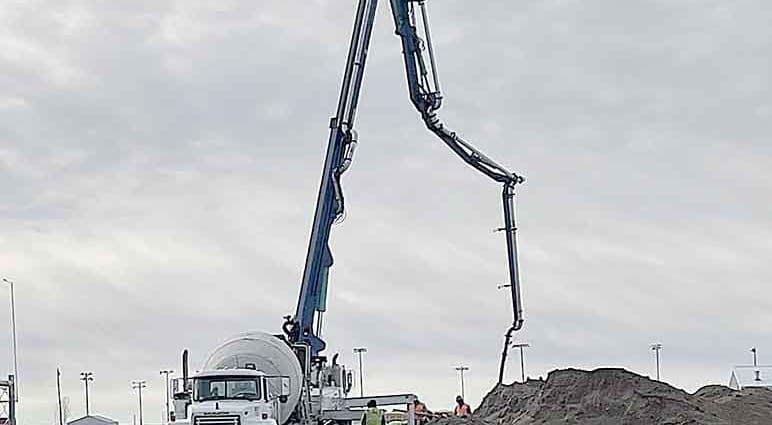 Chad Rayl of owner’s representative Project One provided the update on the district’s $32 million project. He said there still is $3.2 million in owner’s contingency, and overall the project remains on budget.
Crews have started the asbestos abatement in the art and band area at Yuma High School. There was some minor demolition work done during the holiday break, including there being six-inch concrete slabs above the ceilings of the offices. Rayl said the major demo work will be done after the abatement.
When asked by board members later in the report, they were told the band and art section is expected to be completed by late May.
Besides some minor punch list items, the gym and weight room were completed a week earlier than scheduled, with the district receiving the certificate to occupy last Monday.

As for the new wing at YHS, Rayl said all the underground electrical and plumbing has been completed. The steel is arriving this week, and the project will start going above ground very soon.
Superintendent Dianna Chrisman told the board the district was meeting with general contractor Neenan Archistruction soon to fine tune the schedule for what remains to be done, so there should be a more-exact timeframe in the near future. She noted it is going to be a brisk timeframe between now and next January, when the project will be completed. She also brought the board up to date regarding the current shuffling of classrooms due to the project, and there will be much more shuffling later.
During board comments at the end of the meeting, Brown said he was very pleased with the weight room and auxiliary gym being open, noting that it was just one year ago that the plans were being drawn up. He recognized the numerous people responsible for the great progress being made.
“I just want to give a shoutout to everyone for doing great on this, and let’s keep it going,” Brown said.

Stimulus and budget
Chrisman informed the board that with the second round of federal stimulus, the district will be receiving an additional $550,000 in ESSER-2 Funds.
However, she said the difficulty is the district already has purchased everything it needs in regards to its COVID response. One accepted use of the funds, though, is on HVAC and ventilation. The district has updated those systems throughout the buildings in recent years, including before the school project.
Some gymnasiums still need a HVAC and ventilation upgrade, such as at The Pit at YHS. Chrisman said that project likely would take most, if not all, of the ESSER-2 funds. “It would be one large purchase instead of several small ones,” she said.
The district is in the process of securing bids for the work. Chrisman said she hoped to have a clearer cost by the February board meeting.
That led into discussion about the “final” budget for the 2020-21 fiscal year. Chrisman said there likely will have to be a supplemental budget before the end of the fiscal year, particularly if the ESSER-2 funds coming in before June 30.
The budget has $471,000 going into reserves, and $500,000 into the Capital Projects Fund.
Chrisman also noted the district is in line to receive $280,000 thanks to Proposition EE passed November, which put a tax on vaping products. The district will receive vaping funds for three years, as will all school districts, before that money is earmarked for other things such as preschool for all Colorado youth.
Chrisman recommended part of this funding go to updating the science curriculum since the state has finally finished the new science standards.
The board then passed the Approval of Appropriation for the 2020-21 budget on a 5-0 vote.

Superintendent’s contract extended
The board met in executive session for about 45 minutes “to discuss a personnel matter involving Superintendent evaluation.”
After reconvening in public, the board unanimously approved extending Chrisman’s contract through June 2024.

More meeting
• Chrisman told the board the district has coordinated with the local hospitals for its staff members, who want it, to receive the COVID-19 vaccine when it comes time following the completion of all those in Phase 1B. She said the district also has opted-in to participate in a home testing program that the state is providing to schools for one month for free, then continue to help share the cost after that. The testing is one every five days, and it must be done in the observance of a telehealth provider.

• The Consent Agenda including the recommendation of Karli Corey as a YMS girls basketball assistant coach, and the separations and resignations of Elena Melendez as cook, Lori Neill as YMS art teacher, and Miguel Ortiz Zunigo, YMS/MES maintenance. It also included a $600 donation from Tall Grass MLP Operations for YHS Science.
• Chrisman provided reports on the Local Accountability Group, which includes a website at which the public can see what the district is doing academically; on the upcoming Season B sports campaigns, and; transportation, including the district having a new bus driver.
• Public posting places for board meetings are the front window at City Hall and the district’s website, yumaschools.org. Chrisman told the board it no longer can be posted at the Post Office. Board members suggested putting up at Shop-All.