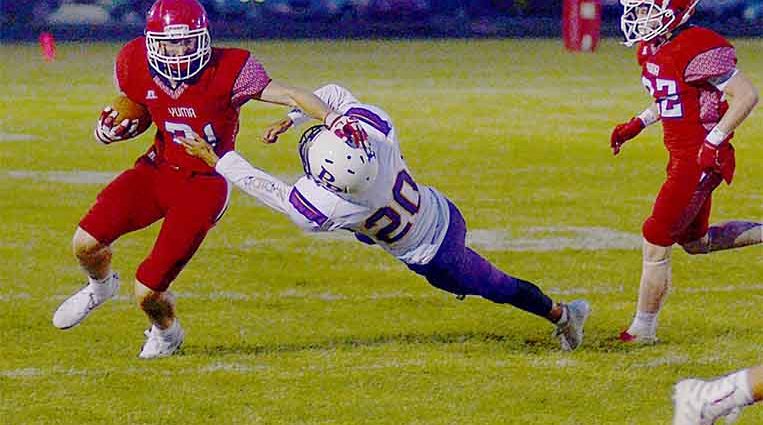 Whomever is lucky enough not to be in quarantine will kickoff the Yuma High School football season with the first day of practice today, September 24.
All of YHS is on remote learning through the end of September, thanks to an outbreak of COVID-19 cases over the past week. As of Tuesday a total of 172 students and staff were in quarantine. However, students, and coaches, who are not in quarantine can still practice. At last count, there was a total of eight cases associated to the Yuma schools, mostly at YHS.

The first games for the schools who have chosen to go with the fall season, will be October 8-10. CHSAA is doing the scheduling for all teams. They were released Tuesday afternoon, with Yuma opening at Limon on the second weekend in October. (See here for the Indians’ full schedule.)
All teams will play a six-game regular season. Eight teams will make the playoffs. Teams that do not qualify can schedule a seventh game against another non-qualifier in Week 1 or Week 2 of the postseason. The championship games will be December 5.
Teams must play at least four of the six regular-season games to be eligible for the postseason.
YHS Athletic Director Michael Dischner said earlier this week he was requesting an October 10 opener for the Indians, since many players would not be able to start in-person practice until October 1. He said he also asked CHSAA if virtual practices for quarantined players could count toward the required nine before playing a game, but had not received a response.
In fact, Dischner told the Yuma-1 Board of Education on Monday night that a lack of communication from CHSAA has been very frustrating through this whole awkward process of trying to have a fall season after all. A total of 31 Class 1A schools have chosen the fall season, but 11 still plan to play in Season C, which runs from late February through early May for the championship.
After a week or more of going round and round, the CHSAA Board of Directors had voted on September 8 to stick with the initial 2020-21 activity schedule released August 4, which kept football in Season C. However, the Governor’s COVID-19 Response Team released new variances last week that opened the board for football, field hockey and sideline spirit to be held in the fall.
The CHSAA Board of Directors then voted last Wednesday night, September 16, to approve the variances. It gave schools the choice to go with a fall schedule, or stick with Season C.
Dischner said Yuma’s decision to go with the fall season was done in conjunction with the rest of the North Central Conference schools, which includes Wray, Holyoke, Burlington, Limon and Wiggins. All the schools chose the fall season. Highland has been added to the North Central for this season.
Dischner said the hope would be that the teams would be kept together since all are playing, helping to avoid real long trips.
Conversations among the schools included the figuring that the weather conditions in February and March would not be the best for football. There also was concern about the busy sports schedule after the holidays. Sports such as wrestling and basketball will be in January and February, followed immediately by football. There were concerns that wrestlers who drop weight for that sport would not be at their regular football playing weight.
Dischner said league conversations were continuing about having the same protocols at each school, and maybe have some local control over the guidelines.
The variances allow for 50 players, per sideline, to be on the field during a game, which allowed for the resumption of fall football.
However, there are many restrictions that must be followed.
• All participants, including athletes, coaches, match officials, staff, and others, must wear masks while not actively playing, even outdoors. They must also be six feet apart from non-household members on the sidelines, or while not in active play. They may not go into the spectator area.
• Spirit participants must perform off the field of play, and must be at least 25 feet away from participants and spectators at all times.
Dischner said the schools also are being told locker rooms cannot be used by the visiting teams, there will be no sharing of water bottles, teams cannot have in-person film sessions, and more.
Unfortunately, the move to fall football finally happened just as COVID-19 broke out at YHS.
Dischner said, though, that at least that the use of contact tracing with the Northeast Colorado Department of Health allows for tracking down students and staff who have had direct exposure, allowing the rest to continue.
Approximately 50 players are expected to go out for football at YHS. At least some should be able to attend the first practice in-person today.
Look for more on the football team in next week’s edition.